Chinese authorities deny a Uyghur scholar the right to travel outside of the country.
2010-05-20
Tweet 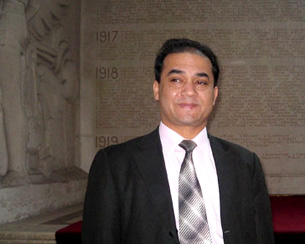 HONG KONG—Authorities in Beijing have recently informed an outspoken ethnic Uyghur scholar that he will be barred from leaving China, at least for the rest of the year, regardless of his destination.

Ilham Tohti, a prominent economist at Beijing's Central Nationalities University, said he had been refused permission on eight separate occasions to travel overseas to attend academic conferences and to give lectures since deadly ethnic violence gripped the Xinjiang Uyghur Autonomous Region last July.

"Two people [from the state security police] came to visit me and informed me that in the future I wouldn't be able to travel overseas," Tohti said. "They gave no explanation whatsoever."

"This time I wanted to go to the Netherlands and Hungary on a trip that had to do with academic exchange and my professional specialism."

Fearful of a repeat of his unofficial detention after he tried to travel to Turkey in April, Tohti said he approached the state security police before planning his trip.

"I asked them if I would be banned from leaving the country forever," he said. "They just knew that I wouldn't be allowed to leave China this year. They didn't know about next year."

"I told them about my rights under the law, but it didn't do any good. Of course I have to be careful what I say," said Tohti, who was briefly detained in the wake of the Urumqi rioting, which left nearly 200 people dead, according to the government.

Last month, Tohti was taken off on a surprise "vacation" to the southern resort island of Hainan by police after he had already received a visa and permission from his employer to attend an April 19-25 academic conference in Turkey, along with four other Uyghur academics from Urumqi.

The unexpected trip effectively prevented Tohti, who holds a valid Chinese passport, from attending the event, and officials told him they wanted to stop him from talking to the foreign media.

According to China’s Law on Civil Rules of Exit and Entry, authorities may refuse exit or entry only to Chinese citizens who hold invalid, altered, or forged travel documents.

China's Constitution prohibits "unlawful detention and other means of illegal deprivation or restriction of personal freedom of its citizens."

While the authorities announced the resumption of full Internet access in Xinjiang after 10 months of full or partial blackout last week, popular Uyghur-run Web sites were still blocked, including Tohti's own Web site at www.uyghurbiz.net.

He said all eyes are now on the new Xinjiang Communist Party secretary, Zhang Chunxian, who replaced the hard-line and deeply unpopular Wang Lequan last month.

"Everyone is now waiting for the new Party secretary to bring in new reforms," Tohti said.

"The media seems to have a fairly high opinion of him ... We are still not sure what his policies will be."

Tohti warned that the deep ethnic tensions of the region won't be fixed merely by throwing money at them.

"The important thing isn't how much money you invest," Tohti said.

"What matters is the development model, the allocation of different interests, the question of how much of a part local people will play, and how you implement citizens' rights," he said.

"It's an illusion to think that any problem can be solved by using economics alone," said Tohti, who has been repeatedly detained and accused of separatism after he criticized Beijing's policies in Xinjiang.

Tohti’s blog, Uyghur Online, publishes in Chinese and Uyghur and is widely seen as a moderate, intellectual Web site addressing social issues. Authorities have closed it on several previous occasions.