Chinese authorities use tear gas on unpaid workers protesting the death of a fellow employee.
2012-05-29
Tweet 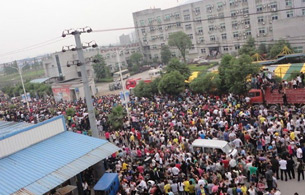 Police in the eastern Chinese province of Zhejiang fired tear gas amid clashes with nearly 1,000 unpaid workers, according to local witnesses, who stormed local government offices on Monday after the death of a fellow worker earlier this month.

"A manager from the factory was fighting with a worker protesting unpaid wages; the two of them were grappling together," said an eyewitness surnamed Chen who said he saw subsequent clashes.

"The manager beat him with an iron bar, but he didn't hit him around the head ... his head was smashed against the ground as the pair of them hit the ground," Chen said.

The dead man's parents called on fellow migrant workers from the central province of Hunan to band together in protest at the incident, he added.

"They went to make a fuss at the government offices, so the riot police arrived and everyone got beaten up," Chen said. "There were about 100 riot police and about 1,000 ordinary people."

He said riot police had used tear gas because they were outnumbered.

Yang Zhi, 20, was confirmed as having died from head injuries sustained in a fight with Xu Qiyan, 39, during a dispute over unpaid wages, the Rui'an municipal government said in a statement.

Xu turned himself in on May 14 and was formally detained the following day, official media reports said, which said the "mass incident" happened after talks between Yang's relatives and officials over compensation turned sour on Monday.

Chen estimated the total number of injuries at around 80.

"Quite a few police were injured. Even the deputy police station chief sustained a leg injury from a beating," he said.

A second local resident said around 400 protesters had managed to get inside the government offices, where they smashed windows and office equipment.

"More than 40 vehicles were turned over and the windows in the offices were all smashed," the resident said.

An official who answered the phone at the Xianfeng township government offices on Tuesday said: "The leaders are dealing with this."

He added: "There is no estimate of the economic damage yet," but said he had no further details.

A third local resident said Beijing, which is dealing with a major political crisis ahead of a key leadership transition later this year, had sent officials to the scene to investigate.

"There are even people from the central government," the resident said. "The father of the young man who died is an army veteran from Hunan; he is a retired soldier."

Retired military personnel have been cited by officials and activists as a "highly sensitive" segment of the population, who might swing a tide of public opinion in their favor and against the ruling Communist Party, because of their proven loyalty and links with the People's Liberation Army (PLA).

Low or unpaid wages and few rights protections have sparked labor battles in factories across China in recent months.

China's new generation of rural migrant workers is far more assertive than their parents in confrontation with bosses, and has sparked a fresh wave of strikes and protests sparked by the current economic downturn.