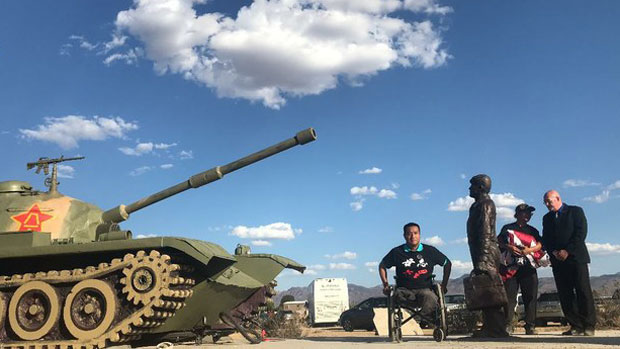 In 2017, Chinese sculptor and political activist Chen Weiming unveiled a sculpture of Crazy Horse to mark the opening of Liberty Sculpture Park in California’s Mojave desert.

Two years later, Chen had turned out a huge, numerical moment to those who died in the Tiananmen massacre and a life-size sculpture of the “Tank Man,” commemorating the 30th anniversary of the 1989 pro-democracy movement on Beijing’s Tiananmen Square.

“The Tank Man is a symbol of the Chinese people’s fight for justice in the face of an authoritarian regime,” Chen told RFA.

“Now, we have given him a definite shape using art, so as to let the world know about the courage of the Chinese people in opposing dictatorship, and to encourage us to keep up the struggle for freedom and democracy in China.”

Chen set up the Liberty Sculpture Park near the small town of Yermo in southern California, just off the No. 15 interstate highway, on just 36 acres of land.

He said he picked the spot because I-15 is a busy highway often used by Chinese tour groups in the United States.

The Liberty Sculpture Park also boasts a June 4, 1989 memorial to the dead of Tiananmen Square that was unveiled 100 days ago, a replica of the Goddess of Democracy, as well as sculptures of late Nobel peace laureate and political prisoner Liu Xiaobo and late labor activist Li Wangyang, who died in police custody.

“As an artist, I have done what I had to do,” Chen said. “A lot of writers and composers contributed a lot of stuff [to the memorial activities] as well.”

“If we all work towards it together, then democracy and freedom will come to China,” he said. “Then, the day will come when we are able to put up our sculptures of the Tank Man, the June 4 Memorial, and the Goddess of Democracy in our own country.”

'I went back in time'

Veteran 1989 democracy activist Fang Zheng, who lost both legs after being crushed by a tank during the crackdown, unveiled the Tank Man sculpture on June 4, 30 years after the People’s Liberation Army used guns and tanks to crush a weeks-long student-led protest movement on Beijing’s Tiananmen Square.

“I feel very emotional, as if I went back 30 years in time to Tiananmen Square,” Fang said after the unveiling of the statue. “Back then, we thought China was so close to achieving democracy.”

“But when I saw the Tank Man sculpture, I also saw the bloody memories of the crackdown,” Fang said.

Former 1989 student activist Wu Jianmin said the dissident movement is thriving in the U.S., with younger people taking part in spite of being raised with scant knowledge of the events of 1989.

“We have generation after generation of them overseas, including young people, adding their effort to the opposition to the [ruling] Chinese Communist Party,” Wu said. “You can see how big it has gotten just by looking at the Liberty Sculpture Park.”

“Hundreds, nearly a thousand, people came here [on Tuesday] to show the world that the people will never forget June 4, 1989,” he said. “The Communist Party may try to erase it, but they won’t succeed.”

Knew only a little

U.S.-based Liu Dasheng, who was born in 1993, said he knew only a little of the massacre or of the student movement that preceded it before coming to the U.S.

A former social media star, Liu said he too believes that democracy will eventually come to China.

“I had never been to a large-scale memorial event for June 4 before,” Liu said. “There were some older people here who have been coming every year, which I found very moving.”

“When I was living in China, I was able to see some photos and so on by scaling the Great Firewall, but my overall grasp of what happened was pretty hazy,” he said.

“After I got to the U.S., I spoke to a number of people who lived through it, so I learned more about what happened on June 4, 1989,” he said. “We have a responsibility to make sure the truth gets out. I think China will inevitably move towards greater freedom.”

Reported by C.K. for RFA’s Mandarin Service, and by Wong Siu-san, Tam Siu-yin and Sing Man for the Cantonese Service. Translated and edited by Luisetta Mudie.

This is the real nature of communism : threatening , killing, preventing people from being free. The people of Hongkong have never inspired by your blood-sucking regime Sir.It's too bad that Hongkong was given up by the UK and turned it back to China for some real-politik reasons. This gives the lesson to be learned for Taiwan. Dear Taiwan never trust red China. Don't even listen the one country / two systems propaganda. IT'S A TRAP that you can avoid to fall in.

The Tank Man, Wang Dan , Wuer Kai si and the rest are wasting their time with democracy. Democracy did not, and will not take root in China. Stop dreaming. If those morons in Hong Kong is not careful, the Tiananmen tanks will be rolled out of PLA Hong Kong barracks.