China's Army of Petitioners Invades Beijing Ahead of Annual Congress 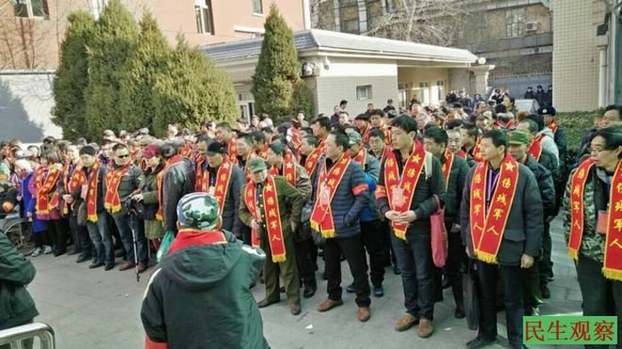 Some of the thousands of disabled veterans during a protest at the Central Military Commission. The veterans traveled from the provinces to Beijing to petition the government to pay their pensions, Feb. 25, 2016.

A large group of retired and disabled Peoples Liberation Army veterans are joining the thousands of people marching into Beijing this week in an effort to get the Chinese government or the Chinese Communist Party to address a wide array of grievances.

While Beijing makes a big show of its military and likes to boast about its prowess, PLA veterans told RFA’s Chinese Service that the government also likes to forget about them if they are disabled or retire from the service.

PLA soldiers and officers staged a protest outside the Central Military Commission in Beijing this week in an effort to get the government to remember what it owes its military pensioners.

"Our demands are that they should definitely implement the payment of some of our pensions," Hubei-based retired solider Cui Liyi told RFA. "The government should be paying them, but it keeps deferring the issue, and dragging its feet, and the payment never comes.”

Cui said PLA soldiers had done so much for their country, but they are now facing old age with little income or other protection.

"We want an answer as soon as possible, so we can live peacefully and enjoy our old age," he said.

For making their demands, the former soldiers were met with beatings and detentions.

"We are in the police station right now, and our platoon leader Qiao was beaten up by police. Can I talk to you later?” a disabled veteran surnamed Yao told RFA.

A veteran surnamed Xu said he was also beaten.

"Disabled PLA veterans come to Beijing to tell them about their issues, and then we get beaten up by the Beijing police," Xu said. "I am in the Fuyoujie police station today."

"There are more than 100 people here right now ... our platoon leader is still lying on the street outside. His name is Qiao Zhigang and he's from [the northeastern province of] Jilin," Xu added.

Chengdu-based petitioner Yuan Ying said the numbers of protesters at the scene swelled to 2,000, although it was unclear if all were PLA veterans.

PLA veterans aren’t the only Chinese citizens with grievances against the government or the Chinese Communist Party who are filtering into Beiling this week.Major political events like the opening of the National People's Congress (NPC) on March 5 are a big draw for those hoping their grievances will get a hearing, or at least some publicity.

But some say they are being threatened and detained by local officials before they have even left their homes.

Authorities have now perfected a system of "interceptors," local enforcement officers sent by local governments to ensure no tales are told of their misdeeds in Beijing.  Petitioners are often held in unofficial "black jails," and face other forms of threats, harassment and extrajudicial detention.

Yuan told RFA that about 2,000 petitioners protested outside the Central Military Commission today, accompanied by about 400 interceptors.

According to Shanghai-based petitioner Chen Jianfang, large numbers of petitioners have tried to make the now-perilous trip to the capital in recent days, only to be detained or held under close surveillance and house arrest by police.

"They have already started seeking people out, and threatening them," Chen told RFA. "They are already making their move."

"A lot of rights activists and petitioners have been threatened by interceptors, and told that they mustn't travel to Beijing," Chen said. "This is illegal."

Chen said she has managed to evade detention by interceptors so far, although four of her fellow activists were less lucky, and are currently being held by police under criminal detention on unknown charges.

"Ding Deyuan was detained without any legal process whatsoever; he was basically kidnapped," she said. "There was no notification sent to the family."

"The police are basically kidnapping people ... and taking them to the police station, and then cooking up some charge against them," Chen said. "Then they write it on the detention notification, but it's fake; it never happened."

"These are trumped-up charges."

Reported by Qiao Long for RFA's Mandarin Service, and by Wong Lok-to for the Cantonese Service. Translated and written in English by Luisetta Mudie.

What does this show? It shows the Communists are using and abusing people, especially those who served the country.