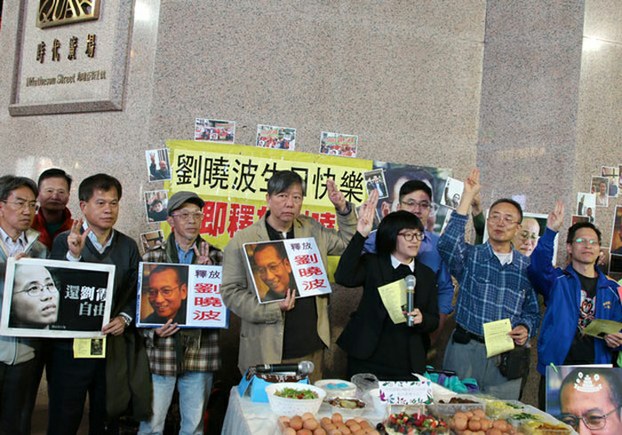 Jailed veteran Chinese dissident and Nobel peace laureate Liu Xiaobo turned 60 in jail on Monday, amid growing calls for his release from rights activists around the world.Liu was denied permission for a family visit by authorities in the northeastern Chinese province of Liaoning, where he is imprisoned, while his wife was forcibly removed from Beijing to prevent her becoming the focus of any activism.Activists in Hong Kong toasted Liu, who received the 2010 Nobel Peace Prize to the fury of the ruling Chinese Communist Party, who was represented at a birthday meal by a portrait and an empty chair, recalling the 2010 Nobel prize awards in Oslo."Anyone who is in prison should enjoy certain basic rights, including the right to communicate with friends and family, and to get news of them, including birthday greetings," Richard Choi of the Alliance in Support of the Patriotic Democratic Movement in China, told RFA."Their families should also have the right to visit them at specified intervals, especially on such a red-letter day as their 60th birthday," he said.Choi called for Liu's immediate and unconditional release.

"We believe that Liu Xiaobo is innocent, and ... we will continue to work through various channels to fight for that outcome," Choi said.Fujian-based blogger and member of the Independent Chinese PEN writers' group Fan Yanqiong said Liu was remembered by the group's members as an honored former chairman."We hope that the Chinese government will change its ways and allow prisoners of conscience out early," Fan said. "Why was Liu Xiaobo, someone who called for democracy and constitutional government, locked up in the first place?""We wish him long life and ... good health, and hope he gets out of jail as soon as possible, so he can continue to promote democracy and constitutional government," Fan said.Wife still harassed

London-based Amnesty International has meanwhile called on its activists around the world to celebrate Liu's birthday on Monday, on of its Hong Kong-based China researchers William Nee told RFA."Amnesty International calls on the Chinese government to release Liu Xiaobo immediately, and to end its harassment of his wife Liu Xia," Nee said."Ever since Liu Xiaobo was detained, we have been calling for his release, and we are calling on our members to hold meals celebrating his birthday today, to step up pressure on the Chinese government to release him," he said.Liu Xia, who has been under close surveillance or house arrest since her husband's award was announced in October 2010, was taken to an unknown location by state security police ahead of the his birthday, Guangdong-based activist Ye Du, a friend of the couple, told RFA."Liu Xia was taken 'on vacation' yesterday and has already left Beijing," Ye said. "I have tried to call her but nobody is picking up her phone.""I'm guessing they won't let her go for a few days, because it's Liu Xiaobo's 60th birthday, which is drawing quite a bit of international attention," he said.In Hong Kong, the Alliance held a birthday celebration for Liu, its founder and pan-democratic politician Lee Cheuk-yan told RFA."It has been seven years now, and the attraction of Liu Xiaobo and his Charter 08 has continued unabated, and its message has become all the more poignant," said Lee, in a reference to the political blueprint co-authored by Liu that formed the basis of the charges against him."In an era full of conflict and hatred, Liu Xiaobo held fast to the principles of peace and democracy," Lee said. "In fighting for his freedom, we are all also fighting for a sense of hope.""That's why we are celebrating his birthday."The 2010 Nobel Peace Prize was awarded in absentia to Liu Xiaobo, and China's state security police maintain tight restrictions on a number of prominent rights activists linked to the jailed dissident, as well as their families.Beijing stepped up pressure on political activists around the country when Liu, currently serving an 11-year jail term for subversion, was named the Nobel prize recipient.The award sparked a nationwide clampdown on anyone having a connection with Liu or Charter 08.Reported by Xin Lin for RFA's Mandarin Service, and by Wen Yuqing for the Cantonese Service. Translated and written in English by Luisetta Mudie.