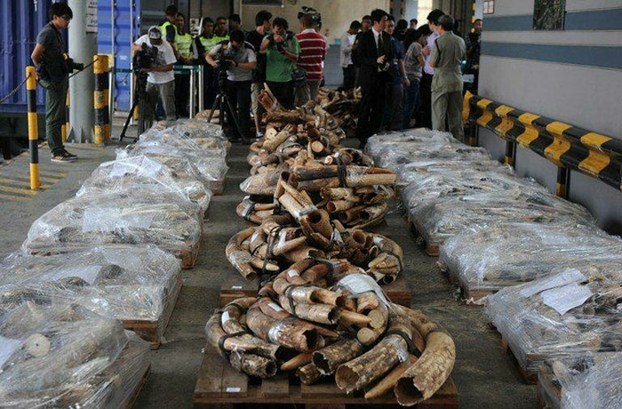 China’s new ban on ivory products bought before 1975 contains so many loopholes that elephant poachers, smugglers and traders will be able to evade the Beijing's latest attempt to throttle the ivory trade, a leading wildlife campaigner told RFA.

On Tuesday, the State Forestry Administration announced that it was widening the ban on ivory imports amid growing pressure to clamp down on the trade that sees thousands of African elephants slaughtered annually.

Unlike previous one-year bans on imports of African ivory carvings and on all ivory hunting trophies that were extended until 2020, the ban on pre-1975 ivory only lasts until the end of the decade, the administration said in a statement on its website.

Prices for African ivory can reach U.S.$1,100 a kilogram in China, which is seen as a key driver in the illegal slaughter of elephants for their tusks.

"These measures aren't enough. They are a very long way from being enough," Ge Gabriel said in a recent interview with RFA.

"That was a very meaningful and important promise," Ge Gabriel said, but added that it hadn't yet been made a reality.

Last September, the U.S. and China pledged to work together to enact "nearly complete bans" on the import and export of ivory.

It was hailed by National Geographic magazine as "the most significant step yet in efforts to shut down an industry that has fueled the illegal hunting of elephants, putting some species at risk."

But Ge Gabriel said the State Forestry Administration continues to issue time-limited bans, that encourage ivory traders to sit on their stockpiles and wait for the bans to expire.

"[They] issued two directives from 2014 to 2015, which were effective for one year each. One was regarding the import of carved ivory, and the other was about hunting trophies," she told RFA.

"They had effect for one year ... If you set time limits of this kind, you leave a loophole for smugglers, who just plan to start up again when the ban has expired, and continue to make illegal imports disguised as legal imports."

The end-of-the-decade time limit is no different, she said.

While China signed a pact banning the global trade in ivory in 1989, it negotiated an exemption in 2008 to run a government-controlled market in "legal" ivory.

The government-owned ivory is then sold in portions to licensed ivory-carving companies annually.

Ge Gabriel and IFAW say this practice is confusing the issue with the Chinese public over the ethical aspects of the ivory trade, while making it easier for the illegal trade to continue.

And people are increasingly using it as a form of investment, Ge Gabriel told RFA.

"Stockpiled ivory gets sold off at auction, and a lot of people were using it as a hedge against inflation, buying it as an investment," she said.

More than 20,000 elephants were killed for their ivory last year, with similar tolls in previous years, according to conservationists. There are about 470,000 of the animals left.

The Convention on International Trade in Endangered Species of Wild Fauna and Flora (CITES) took effect in 1975, with a total ban on the ivory trade in 1989.

Like other countries, China permits the resale of ivory bought before the 1989 ban—and also has a stockpile purchased with CITES approval in 2008, which it releases for sale with certification.

Activists are stepping up calls for a complete ban on any ivory sales.

Under the China-U.S. joint statement, both sides pledge to bring in "significant and timely" restrictions on hunting trophy imports and steps to halt the domestic commercial ivory trade.

Much of China's ivory imports come in through the semiautonomous city of Hong Kong, which said in January it would ban hunting trophies and restrict the ivory trade further, but with no clear timeframe.

Experts estimate that China accounts for as much as 70 percent of global demand for ivory.

Police in the southern province of Guangdong on Monday said they had seized around 450 kilograms of smuggled ivory in a raid earlier this month, local media reported.

Reported by Xi Wang for RFA's Mandarin Service. Translated and written in English by Luisetta Mudie.