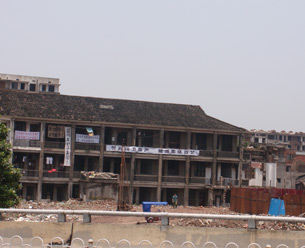 In an undated photo provided by a local resident, homeowners facing a forced eviction in Rongwan hang a banner pledging to defend their property, even if they are forced to set themselves on fire.
Local resident

HONG KONG—Authorities in the southern Chinese city of Changsha snatched the dead body of a 56-year-old man who hanged himself in protest at being evicted from his home to make way for a major property development, residents said.

"A vehicle came from the undertaker's to take the dead body away, but the [relatives] refused," said a resident of Changsha's Rongwan township surnamed Ding.

"At this point there were a lot of police on the scene, some in camouflage, probably about 200 of them in all," she said.

"Several of them dragged the body out, then about seven or eight of them lifted it into the vehicle."

She said relatives had erected a marquee in the street to hold a funeral rite for Huang Jianhua, a laid-off worker who lived in accommodations belonging to the Industrial and Commercial Bank of China branch at No. 1 Baishaye Road.

Huang, 56, was found dead by a neighbor Friday, with a suicide note in his pocket saying he had been forced to sign an eviction agreement against his will.

The owner of a nearby business surnamed Xu was also at the scene.

"There were about 200 people: police, local community officials, and municipal management officers in charge of the evictions," Xu said.

"They put the body into a vehicle and took it to the undertaker's."

"There were a lot of onlookers as well ... some people were taking photos on their cell phones and the police grabbed them immediately and wouldn't let them do that," he said. 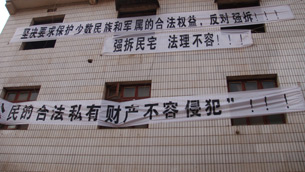 In an undated photo provided by a local resident, property owners in Changsha post banners protesting another forced eviction. Credit: Local resident Local resident
"There were a couple of elderly people I guessed were his parents. The old lady was lifted into the vehicle by four of five people."

A police officer at the nearby Wangyuehu police station confirmed the suicide.

"Yes," he said, when asked if an evictee had hanged himself, but declined to give further details.

A relative of Huang's, surnamed Liu, confirmed that there was a suicide note in which Huang expressed his deep dissatisfaction with the eviction agreement.

"We are still in discussions about this, but so far there hasn't been any result. We have reached an initial agreement and the body has been taken to the undertaker's," Liu said.

An employee who answered the phone at the Changsha municipal government offices denied the suicide and the tussle over Huang's remains, but she confirmed the large police presence in the area.

However, an official who answered the phone at the Changsha municipal police department said the police would release information on the incident later.

"That's right," she said, when asked about Huang's suicide.

"Police have already gone to the scene. I don't know the details, but they will make a news announcement to all the large media organizations later."

Officials said 2,851 homes were slated for demolition, creating a total of 8,625 evictees.

The evictees had long complained that the compensation rates of 5,000-6,000 yuan (U.S. $730-880) per square meter wouldn't buy them even the poorest dwelling in the same area of the city.

An apparently leaked copy of a memo from the Communist Party's powerful propaganda department posted online called on media organizations to refrain from reporting on the "death of an evictee linked to the improvement project in Rongwan township, Yuelu district, until an official report is released."

"Any reports and discussion of the topic must be deleted immediately," the memo said.

The ruling Communist Party has warned of penalties for officials involved in graft related to China's property boom, allegations that are often at the heart of mass protests and public anger over urban evictions and the acquisition of rural land for development.

Officials will face punishment if they are found to have engaged in graft related to bidding on construction projects, the transfer of land and mining rights, real estate development, and city planning, official media reported Monday.

The agency said such behavior had triggered a "strong public backlash," adding the party planned to "firmly address and rectify" the problem.