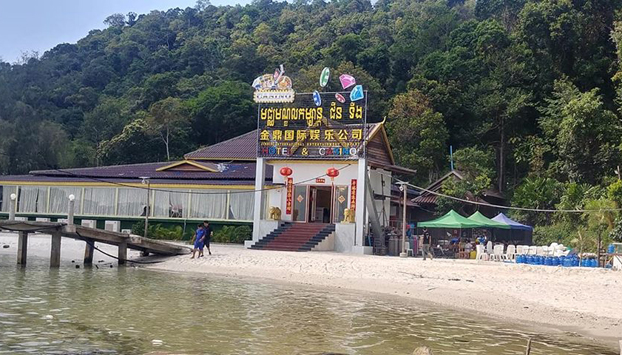 The Jin Ding casino and hotel on Cambodia's Koh Rong Samloem Island is shown in an undated photo.
Photo courtesy of Mother Nature

Owners of a Chinese-run casino closed for polluting a beach in Cambodia’s Sihanoukville have applied to build a new casino in another location, amid growing concern that their already-shuttered first facility has not yet been torn down, sources say.

The Jin Ding casino located on Koh Rong Samloem Island, a popular tourist destination in the seaside resort town, was ordered to close in May because it was operating without a license, promoting illegal online betting games, and releasing untreated sewage directly into the sea.

Cambodian activists have long called for the demolition of Jin Ding, saying that if the structure is not destroyed it will likely be reopened at a later date. But provincial authorities have delayed in tearing the casino down.

Speaking on Tuesday to RFA’s Khmer Service, Preah Sihanouk province spokesperson Kheang Phearum said that Jin Ding’s owners have now applied for permission to build the casino again at a new location, and that the owners will demolish the old buildings when the new facility is built.

“They are not refusing to remove [the old structures]. They just want more time to construct a new building,” he said, adding that authorities regularly monitor the former structures to ensure that business operations there have not resumed.

“We are now waiting to see how they proceed with the authorized work,” he said.

Speaking to RFA, Thun Ratha, an activist with the environmental advocacy group Mother Nature, said that provincial authorities only stand to benefit by allowing Jin Ding’s owners to delay destruction of the casino’s buildings.

“Surely the public will see that what the authorities are doing is just a kind of theater meant to show that they are enforcing the law, when they are actually concerned only with business interests.”

'The law was not enforced'

Also speaking to RFA, Pen Bonnar, a local community empowerment officer for the rights group Adhoc, said that the fact the casino still stands points to possible corruption in connection with the case.

Authorities must now demolish the casino's structures in order to enforce the law, he said, adding, “As we have seen, actions that were taken in the past were not effective because the law was not enforced.”

In mid-October, a small group of15 Cambodian monks and environmental activists launched a march from the capital Phnom Penh to Sihanoukville to underscore popular demand that the casino be taken down.

Chinese investment has flowed into Sihanoukville in recent years, but Cambodians regularly chafe at what they call unscrupulous business practices and unbecoming behavior by Chinese businessmen and residents.

A report by the AFP news agency in January on how Sihanoukville had become a “sizeable gambling playground” for Chinese tourists said at least 50 Chinese-owned casinos were operating in the province.