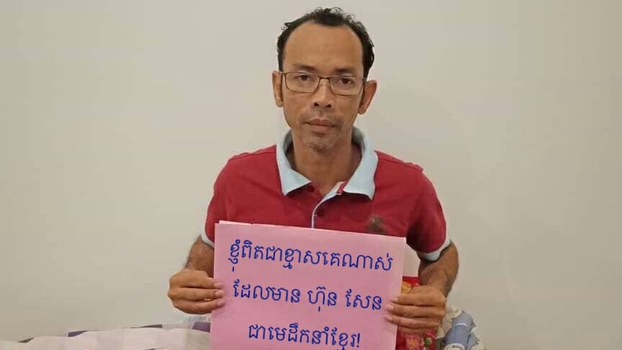 In a photo he uploaded to Facebook, Mai Hongsreang holds a sign that reads “I am so ashamed to have Hun Sen as Khmer leader.”

According to the Cambodian national police, Hongsreang was charged with insult and incitement for his activities on social media.

Police spokesperson Lieutenant General Chhay Kimkhoeun confirmed the arrest, adding that the suspect was being questioned at the Ministry of Interior prior to his scheduled court date. The spokesperson also said the suspect had fled to Thailand but was arrested upon his return.

“The CNRP condemns the arrest of Mai Hongsreang and urge the authorities to release him and other activists immediately without any conditions,” the statement said.

“[We] also urge NGOs to monitor human rights abuses and continue to pressure [the] regime to halt persecutions and threats against CNRP activists,” the statement continued.

In an interview with RFA’s Khmer Service, Hongsreang’s wife Kea Sisokunthy said her husband was arrested for criticizing the government, but she maintained that he was innocent.

“He dared speak the truth. He didn’t commit a single crime. They are infringing on his free speech rights,” she said.

She confirmed that Hongsreang had fled to Thailand after he was tipped off that he would be arrested in May. The tipoff came shortly after he posted a comment on Facebook about infighting between Prime Minister Hun Sen and Interior Minister Sar Kheng.

She said he had been in Thailand for several months before returning to Cambodia to visit a relative in Sihanoukville, where he was promptly arrested.

Am Sam Ath, deputy director for the Cambodian League for the Promotion and Defense of Human Rights (LICADHO), said authorities have been recently stepping up arrests against activists tied to the CNRP.

“This arrest is a threat against the freedom of expression,” he said, adding that NGOs are concerned over Cambodia’s restrictions on internet freedom.

Another CNRP activist, from Battambang province said he was concerned for his security after a local police office called him many times regarding a gathering of activists he organized. The others attending were also activists who had commented on Facebook about the possibility of Cambodia losing its Everything But Arms (EBA) status with the EU.

The EU announced in February it would launch a six-month monitoring period to determine whether Cambodian exports should continue to enjoy tax-free entry into the European market under the EBA scheme, prompted by the Cambodia’s Supreme Court banning the CNRP.

Another CNRP activist from Battambang’s Sampov Loun district said that police were spying on him and other activists daily. He said the surveillance was hindering his ability to travel.

Officer Tith Samros of the district police force confirmed he had contacted the activists.

“I wanted to know how many people were participating [in the gathering] and their intentions,” he said. He refused to provide further details.

Ying Mengly, Battambang provincial coordinator for the Cambodian Human Rights and Development Association (ADHOC) said that people have the right to express their concerns over the prospect of losing EBA status. He said that police actions are a threat against the activists.

“Police action has violated [their] basic human rights which are guaranteed by our constitution,” he said.

Meanwhile, police in Koh Kong province harassed ADHOC officials who were meeting with local villagers engaged in a land dispute in Sre Ambel district. ADHOC spokesman Soeung Sen Karuna said that police disturbed his team while they were in the process of interviewing the villagers.

The police asked for the team’s identification and monitored the interviews, compromising the freedom of what the interviewees could say.

“This action was inappropriate,” he said, adding that since ADHOC’s establishment in 1992 they had never had any problems with authorities.

In response to the claims by the ADHOC team, Sre Ambel Police Chief Ma Ty denied that his officers disturbed them.

“If [the ADHOC team and the villagers] are innocent, they should have no reason to be afraid,” he said.

He added that authorities have a right to know what happens in the community.

Chhoeung Reth, a villager who participated in the interviews said it was not the first time that police had disturbed the villagers.

He said that in the past the police told them not to disclose information about land issues to rights groups.

“We are afraid when uniformed police officers are looking straight at us,” he said.

Also on Wednesday, ADHOC released a report detailing a decline in human rights in Cambodia, particularly freedom of assembly.

The report highlighted how in the past six months there were at least 71 cases where freedom of assembly was violated by authorities.

The report also noted that police and local authorities required that organizers obtain permission for the gatherings.

“These restrictions are a serious violation against human rights and democracy,” the report said.

Freedom of speech does not exist anymore in my birth country. Any criticism of the government is taken personally and Hun Sen will abuse his power to place anyone in jail that defies his unconstitutional orders. Hun Sen must go; make him pack his sh*t and take his family with him to China.

This gentleman is polite. He was arrested for not speaking like Head of State uses use impolite words on podium, TV, forces teenagers to listen to him for insulting some one with bully gang words. If my parents or friends heard what I am saying bully gang words I will be punish and loose good friends. Head of State were NOT educated at all and never been arrested.