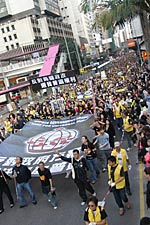 HONG KONG—Tens of thousands of people took to the streets of Hong Kong on Sunday in a bid to speed democratic reforms promised in the territory’s mini-constitution.

Shouting “one person, one vote” and “universal suffrage,” demonstrators marched through the central business district on Hong Kong Island to government headquarters. The march took several hours to pass through the city, with organizers putting the turnout at 250,000 and police counting just 60-odd thousand.

The protest drew young and old, blue- and white-collar workers alike, with many parents bringing their children along.

Among the most prominent present was Hong Kong’s former second-in-command Anson Chan, who joined a public march for the first time since resigning as head of the civil service in 2001 after she criticized Beijing for slamming the brakes on democratic reform.

Standing up to be counted

I just feel there are moments in one’s life when you have to stand up and be counted,

“I just feel there are moments in one’s life when you have to stand up and be counted. And for me, this is one of those moments,” Chan told reporters before the march. “I believe democracy to be good for Hong Kong and in good time, when the time is ripe, it would also be good for my country.”

Top Beijing parliamentarians stepped in last year with a controversial interpretation of the Basic Law, under which the former British colony was returned to Chinese rule in 1997.

Now, Hong Kong’s Special Administrative Region (SAR) government has tabled a set of watered-down proposals for political reform that fail to outline a timetable for full and direct elections to the Legislative Council and for the top Chief Executive position.

“We will do our best to achieve the goal of universal suffrage as fast as we can,” SAR Chief Executive Donald Tsang told reporters following the rally.

“But the most important thing is that we progress step by step towards it...Things will accelerate once we have the first step in place, which is the reform proposals currently due to go before the Legislative Council,” Tsang said.

In a news conference that appeared limited to a few phrases, a casually dressed Tsang seemed to walk a fine line between support for the protestors and loyalty to Beijing.

“For me, the participants in this rally do not merely stand for turnout figure. Each one of them represents a passion, an ideal, which underlines a shared affection for Hong Kong,” he said. “They do not want to see the advancement of democracy stop in its tracks.”

They (the participants) do not want to see the advancement of democracy stop on its tracks,

But the rally wouldn’t affect the government’s plans to put its political reform package before LegCo on Dec. 21 as planned.

Previous marches with a turnout of half a million against controversial national security legislation shocked Beijing’s leaders and resulted in an embarrassing climbdown for the SAR government.

“The proposals that are on the table now are the result of a prolonged consultation process,” Tsang said. “We have very little room for movement. But we have heard the opinions of Hong Kong people.”

The Hong Kong government has argued the Chinese territory isn’t ready for full democracy. It has urged the public to support its political reform package that critics said was too conservative.

Pro-democracy legislators have refused to endorse the proposal and demand a road map that specifies when and how Hong Kong will become fully democratic, as promised under the territory’s mini-constitution.