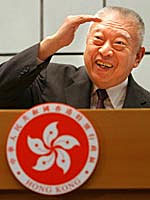 "An hour ago I tendered my resignation as chief executive... My health is not as good as it used to be," Tung told a news conference here March 10, ending a week of speculation. "If I continue as chief executive, I won't be able to handle it,'' said Tung, nicknamed "7-11" because of his long workdays.

Tung, 67, said he had to take painkillers to help him stand through a policy speech in January and that his biggest regret was being unable to serve till his term ends in mid-2007.

The former shipping tycoon with a gray crew-cut had little political experience before Beijing hand-picked him to be Hong Kong's first leader under Chinese rule.

Tung has served as Hong Kong's first post-colonial leader after the end of British rule in 1997. He said that Beijing accepted his resignation. Chief Secretary Donald Tsang would take over as acting chief executive until Beijing names a new leader in six months.

He was widely criticized for his handling of two crises: the Asian financial meltdown that began in 1997 and the 2003 outbreak of severe acute respiratory syndrome (SARS).

Tung denied speculation that Chinese leaders had sacked him despite their pledges to give the city a high degree of autonomy.

"That is not the case at all," he said, stressing that his health was the only reason he was quitting.

Tung's fate was apparently sealed in December when Chinese President Hu Jintao scolded him in public for poor performance in an unprecedented rebuke, analysts said.

Tung enjoyed the goodwill of Hong Kong residents when he began his tenure, but the public quickly turned against him when Asia's financial crisis triggered the first of three recessions that he seemed powerless to prevent or ease.

Unable to vote him out of office, hundreds of thousands of people poured on to the streets in huge demonstrations in 2003 and 2004 demanding the right to elect their own leaders.

The pro-democracy protests shocked communist leaders in Beijing, who feared they could spread to mainland China, and encouraged them to tighten their grip on the city.

Last April, Beijing ruled out universal suffrage for Hong Kong for at least several years and issued a pointed reminder that any political reforms require its final approval.