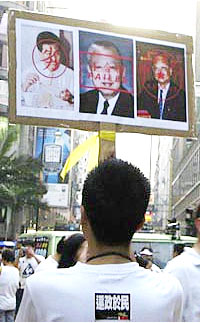 HONG KONG — ; Hundreds of thousands of people braved sweltering heat and humidity Thursday to march through the streets of Hong Kong in an impassioned plea to China for their political voice to be heard, on the seventh anniversary of the former British colony's return to China.

Wearing T-shirts that read "Return power to the people, fight for Democracy" and "Universal suffrage," the crowds began pouring into Victoria Park at the heart of the city's commercial district to start the march to government offices in the Central business district.

Others carried banners protesting Beijing's encroachment on the high degree of autonomy promised Hong Kong at its handover from British rule seven years ago.

"One person one vote to choose the Chief Executive! The future of Hong Kong is in my hands," chanted one protester through a megaphone, as others took up the call. The Democratic Party's contingent carried a six-meter (20-foot) horizontal banner above their heads, emblazoned with the words: "Return power to the people."

"We are here today to fight for democracy. Not a single person here wants independence."

"We are just trying to tell the central government in Beijing that we would like to govern our own affairs," one marcher told RFA.

Media pictures showed some protesters setting fire to the Chinese national Flag-an act considered illegal by Beijing-and being stopped by police officers. Others called on Beijing to overturn the official verdict on the 1989 Tiananmen Square crackdown.

But the crowd was also made up of young and old, workers and retirees, grandmothers, people in wheelchairs, and even a pair of newlyweds. Many voiced concerns that Beijing's communist government was beginning to erode Hong Kong's traditional freedoms of speech, association and the media.

Beijing recently ruled out universal suffrage for elections in 2007 and 2008 before Hong Kong had even initiated a proposal, as permitted by its mini-constitution, the Basic Law.

The tail-end of the march didn't arrive at Central Government Offices in Lower Albert Road until 8 p.m., five hours after it started.

The demonstrators wore white shirts this year, as opposed to last year's black, to symbolize an attitude of greater hope. White is a Chinese mourning color, but it also connotes openness and clarity, forming part of a slang word for Cantonese, "clear speech."

The march's organizers estimated a turnout of 350,000 people, more than the 300,000 expected in spite of the steaming heat, but police gave no estimate of numbers.

Speaking at the march's final mustering point, Jackie Hung Ling-Yu of the Civil Human Rights Front said the event's larger-than-expected turnout was a warning to Beijing. "We made history, this is much higher than expectations... people are out fighting for democracy," she said.

China's leadership was stunned by protests exactly a year ago in which half a million turned out in anger at their own government's handling of proposed anti-subversion legislation. Many comments and speeches Thursday were directed towards Beijing rather than Chief Executive Tung Chee-hwa, who was the principal target last year.

Former Democratic Party chairman Martin Lee announced in an apparent attempt to narrow the gap between him and Beijing that he would personally drop the slogan "Return power to the people." He appeared anxious to reassure Beijing that the protests did not constitute a threat.

"We are here today to fight for democracy," Lee told reporters. "Not a single person here wants independence."

"China misunderstands why we want democracy. They say we're unpatriotic and want independence, so they rule out universal suffrage in 2007 before we even have a chance for discussion, so today we protest to express our anger," Zen told the crowd at the beginning of the march.

According to local media reports, Beijing was indeed watching closely.

Vice-president Zeng Qinghong, the most senior Chinese leader with responsibility for Hong Kong, didn't fly direct to Beijing after ending his African trip. Instead, he arrived in the southern coastal city of Zhuhai across the Pearl River estuary and within reach of Hong Kong television signals, at noon Wednesday, Hong Kong's Chinese-language Economic Daily newspaper reported.

"Our source noted that the CPC Central Committee pays close attention to today's demonstration, and that Zeng Qinghong will stay overnight in Zhuhai and leave for Beijing on July 1," the paper said. It said security measures at the hotel where Zeng stayed had been tightened.

China's official media traditionally ignore popular protests in Hong Kong, at least until well after the event. Beijing has long feared the possibility that the political aspirations of Hong Kongers might spread across the border.

Beijing slammed a recent comment by former Hong Kong governor Chris Patten, in which he suggested Hong Kong people be given more say in the running of their affairs, not less. Foreign ministry spokeswoman Zhang Qiyue told a regular news briefing Thursday that Hong Kong enjoyed "an unprecedented level of democracy".

And at least one Chinese citizen well-acquainted with life under one-party rule appeared to think the march was too late.

"There's no point in demonstrating for political reforms and for direct elections in 2007," a listener from the southeastern city of Wenzhou told RFA host Jill Ku in a call-in show Wednesday.

"Because Hong Kong is ultimately controlled by Beijing, and has to do what Beijing says... I think that it will soon become 'one country, one system.' There's nothing Hong Kong can do about it."