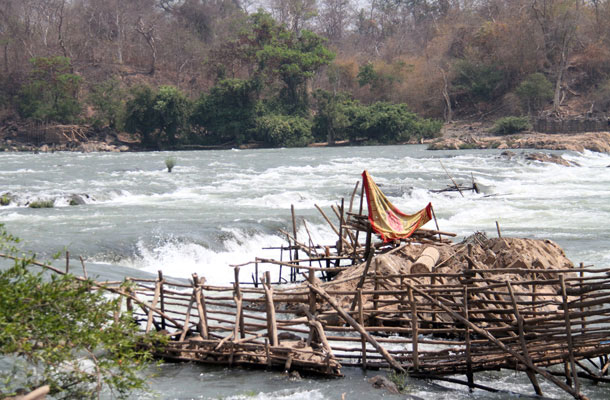 Farmers and fishermen in downstream countries are complaining about the impact of Mekong River dams located upstream in both China and Laos.

But a think tank now has a plan to reduce the damage done to crops and fish stocks by hydroelectric dams. Its focus is on Laos, Southeast Asia’s poorest country, which it says could benefit from scaling back on some of its planned dams.

The Stimson Center, a nonpartisan research center in Washington, D.C., says in a recent report that Laos may be able to mitigate the damage by creating an efficient national power grid and by turning to other sources of power.

Brian Eyler, Stimson’s director for Southeast Asia, says, “…there’s still time to make strategic choices regarding water-energy planning in Laos that can minimize to some extent the effects of dams on downstream environmental flows.”

However, he adds, “this isn’t to say that what has been completed so far is sustainable or of low impact.”

We still don’t know, he says, whether efforts to mitigate the loss of fish stocks and vital sediment blocked by two existing Lao dams, the Xayaburi and Dan Sahong Dams, will work.

Eyler also points out that key tributaries of the Mekong in Laos, such as the Ou River, are already blocked by dams which further divert fish and sediment.

The fish are vital sources of protein in Laos and farther south in Thailand, Cambodia, and Vietnam. And the sediment is needed to replenish riverbanks, riverbeds, and farmland.

The scale of dam building in Laos is far greater than most people realize. But it gets little media coverage outside the Mekong region.

Compared with local people in five other countries sharing the Mekong who speak out and in some cases even organize protests against hydroelectric dams, the Lao people are at a disadvantage.

Laos lacks environmental groups that can draw attention to the plight of the rural people who are displaced or otherwise affected by dams.

A reporter recently in Laos for Radio Free Asia quotes a villager living near the Ou River, or Nam Ou, as saying “the government does nothing for the people, but if I complain, the authorities will just laugh at me, and I’ll end up in jail.”

“It’s not like Thailand here,” the villager says, referring to civil society and environmental groups based in neighboring Thailand.

In Thailand, a group of 37 people living near the Mekong have initiated a legal action against Laos’s Xayaburi Dam. Others are protesting the blasting of rapids on the Mekong aimed at clearing the way for large Chinese ships to travel down the river.

Despite warnings from environmental groups, Chinese engineers began blasting rocks and reefs in the Mekong years ago under an agreement signed by China, Laos, Burma, and Thailand.

But the work downstream is not complete.

In Thailand, protesters have boarded Chinese survey boats and demanded that they halt their work and leave the Mekong’s rapids and riverbanks undisturbed.

Such an action would be unthinkable in Laos.

The Stimson Center asserts that the energy infrastructure in Laos is “highly inefficient and mostly constructed for the benefit of neighboring countries.”

The Lao government, for its part, has stated that its aim has been to gain wealth and alleviate poverty by becoming “the battery of Southeast Asia.”

But the Stimson Center argues that the current hydropower system in Laos favors the needs of investors, which are short-term and driven by the bottom line over those of the state.

In its report, the think tank notes that in Laos many hydropower dams and transmission lines are currently being financed and built by Thai developers and Chinese state-owned banks and enterprises. These commercial projects are backed by nonconcessional loans.

This is in contrast to earlier years when the World Bank and Asian Development Bank offered Laos low-interest loans.

Meanwhile, Lao officials are reported to be struggling to decide how to deal with an anticipated surplus of electricity in 2017.

The Stimson Center says that for Laos “the main obstacle to selling electricity to Vietnam or further afield” is the lack of a reliable national grid infrastructure. This is what Laos needs, it says, to  respond flexibly to fluctuating power demands in nearby countries.

The Stimson report also calls for the United States to play a greater role in supporting efforts to balance Laos’s hydropower development with concerns for the environment, food security, and other uses of water. This would involve more technical aid and training in “human capacity building.”

While welcoming the proposal for more assistance to Laos and the concept of an efficient and reliable power grid, some experts are skeptical that top-level Lao officials will embrace the plan.

But Stimson is taking the long view.

Meanwhile, to the south of Laos, Cambodian fishermen complain that upstream dams in China and Laos have disrupted vital fish migrations, causing a drop in the fish population in Cambodia’s Tonle Sap Lake.

The Tonle Sap, the largest freshwater lake in Southeast Asia, is often described as the heart of the Mekong.

A representative for five Cambodian communes working with a fisheries protection team told a Radio Free Asia reporter several months ago that the Mekong’s flow into the Tonle Sap has been unpredictable over the past five years.

The building of dams inside Cambodia by foreign developers has also stirred criticism from Cambodian villagers being displaced by the dams.

In one case, villagers told the RFA reporter that government officials were bringing in policemen and soldiers, who were threatening arrests or imprisonment of those defending their ancestral lands.

Possible solutions in the Mekong Delta

In addition, Vietnamese farmers complain that upstream dams, including those in both China and Laos, have begun reducing the level of sediment that once replenished the Delta’s riverbanks.

In effect, the heavily populated Mekong Delta combines into a perfect storm everything that could go wrong for a downstream state.

David Brown, a freelance writer specializing in Vietnamese issues, recently concluded an in-depth, four-part series exploring the threats faced by the Delta as well as possible ways to overcome them.

Brown, a former U.S. diplomat, reports that on the potentially positive side that the Vietnamese government now has a Mekong Delta Plan (MDP) based on several years of work by Dutch and Vietnamese officials.

According to Brown, the planners conclude that efforts to try to produce more and more rice and other exportable crops are “unsustainable.”

They recommend building dikes around the heart of the Delta, building a canal big enough to move water south and west of the Mekong’s upper branch, conserving fresh water in aquifers, building reservoirs, and restoring mangrove barriers to absorb salt intrusions.

Finally, Brown’s report recommends that farmers focus on agribusiness and extracting more value from smaller and more diverse harvests that can be marketed through co-operatives.

What does the future hold?

Quoting environmentalists and United Nations experts, Radio Free Asia reported two months ago that Vietnam and other nations in the Mekong region must brace for increases in extreme weather events, such as the El Nino weather phenomenon.

Dams built hundreds of miles upstream from Vietnam will also continue to have a negative impact on Vietnamese farmers and fishermen. And, based on RFA reporting from the Mekong region, much of this impact is now irreversible.

Adding to uncertainty about the future for the Mekong Delta are reports from Chinese scientists and others who say that glaciers in far-off Tibet, the location of the headwaters of the Mekong, are melting more rapidly than expected.

This could result in fluctuations in water levels far downstream that have never been seen in the past.

They cannot stop them from building dams while Thailand is hell bent on building shopping malls that use as much energy as one province. The electricity is nearly all for Thailand, which this article places too little emphasis, it is political, so is it useful to tamper at the edges while corporations and governments do as they like. China is also taking some.