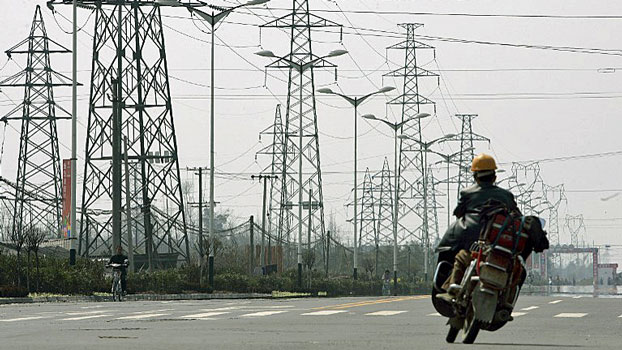 A motorbike rider passes electricity pylons alongside a roadway on the outskirts of Chengdu, capital of southwestern China's Sichuan province, in a file photo.
AFP

China's government has administered a shock to the electricity industry with a new pricing reform plan as it tries to power the economy by cutting industrial rates.

On Sept. 26, an executive meeting of the cabinet-level State Council chaired by Premier Li Keqiang "decided to promote market reform of electricity transactions and reduce the cost for enterprises on power consumption," state media reported.

Starting on Jan. 1, the new rules will end the linkage between coal and electricity prices, allowing rates to be decided through negotiations between power producers, sales companies and consumers, the official Xinhua news agency said.

But the process will be subject to key qualifications.

Non-market rates will still be governed by "the benchmark electricity price of various localities," which can vary within an allowed "floating range" of 10 percent for increases and 15 percent for decreases, according to a state website.

In addition, no price increases will be allowed in 2020 at all, the official reports said.

"In particular, it is necessary to ensure that the average price of electricity in general industry and commerce will only fall and not rise," said www.chinanewsportal.com.

The rule changes are part of an ongoing process of introducing competition in the power generation sector, said Philip Andrews-Speed, a China energy expert at National University of Singapore.

The government first opened the opportunity for generators to sell directly to large customers in 2016, said Andrews- Speed. Next came the introduction of pilot spot markets for electricity trading.

The latest rule changes are meant to cover the generators that have not taken part in the competition reforms, "introducing an element of market pressure ..., but in a controlled manner," Andrews-Speed said.

The limit on downward price pressure is seen as needed because China's generating overcapacity and plans for new plants could cause prices to plunge.

But behind the complicated mechanism, the government has also been working to subsidize China's industries by lowering their electricity costs for what now appears to be the third year in a row.

The price break for business serves as a reminder that Washington and Beijing have yet to settle the thorny issue of Chinese subsidies despite a preliminary "Phase 1" agreement announced Friday to forestall additional U.S. tariffs in the ongoing trade war.

China's power sector regulations have changed from year to year as the government searches for various ways to pay for the rate cuts.

In 2018, the State Grid Corp. slashed rates for commercial and industrial consumers by 10.6 percent, saving them 91.5 billion yuan (U.S. $12.8 billion), according to Xinhua. The estimate from the China Electricity Council was considerably higher at 125.8 billion yuan (U.S. $17.6 billion).

This year, businesses were promised another 10-percent cut to take effect on July 1. No estimate of the additional savings has been given, but the new rules taking effect in January appear to be a sign that the government will continue the implied subsidies for a third consecutive year.

It is unclear how much the reduced electricity costs have been helping the industries' bottom lines. Industrial output growth in August dropped to the slowest pace in over 17 years.

But the economic downturn may make the promise of sharply lower power costs hard to resist. Official statements with the announcement acknowledged the pressures on the manufacturing sector.

"As it is facing difficulties at the moment, multiple measures should be adopted, including reducing power costs," Premier Li said.

The latest announcement on power pricing coincided with reports that profits of major industrial enterprises fell 2 percent from a year earlier in August. Eight-month profits were also down 1.7 percent to 4 trillion yuan (U.S. $562 billion), the National Bureau of Statistics (NBS) said.

Under cover of the nearly impenetrable patchwork of pricing regulations, the government has been picking out individual segments of the power industry to bear the costs of rate cuts.

In 2018, the burden fell mostly on grid companies, although some provinces reduced on-grid tariffs for coal-fired generators, Andrews-Speed said at the time.

This year, it appeared to be the turn for coal-fired power plants to take the financial hit, since more of the provinces cut their on-grid rates.

The new changes announced by the State Council may fall even more heavily on China's big power producers, a Bloomberg News report suggested.

While the companies will feel pressure to reduce rates, they may also stand to lose the benefit of a decline in coal prices, said Daiwa Capital Markets Hong Kong Ltd. in a note cited by Bloomberg.

The rules will bring an end to a linkage system that has been in place since 2004.

"Industrial activities in China have already slowed down during the trade war, so coal demand has weakened, and this new mechanism is not good news to support coal prices," Platts quoted a trader as saying.

The government is apparently prepared to sacrifice power and coal profits for the benefit of the broader industrial sector and the economy, but it is unclear how long the policy can continue without affecting supplies.

While the electricity rules may result from mixed motives of competition reform and industrial subsidies, other recent policies suggest that the need for economic stimulus is uppermost in the government's plans.

In a complex but similar initiative advanced by Li in March, the government eased "corporate burdens" by allowing enterprises to lower their social security contribution rates from 20 percent to 16 percent of workers' wages starting on May 1.

But the cuts came at the cost of China's already-underfunded pension schemes.

To shore up the finances, the government directed state-owned enterprises (SOEs) to transfer 10 percent of their shares to the social security funds, in effect creating an elaborate paper shuffle of illiquid securities to cover pension liabilities.

According to Liu, 67 centrally-administered SOEs and financial institutions have shifted 860.1 billion yuan (U.S. $120.3 billion) into the social security system so far.

The transfers will be "basically finished" by the end of the year, he said.