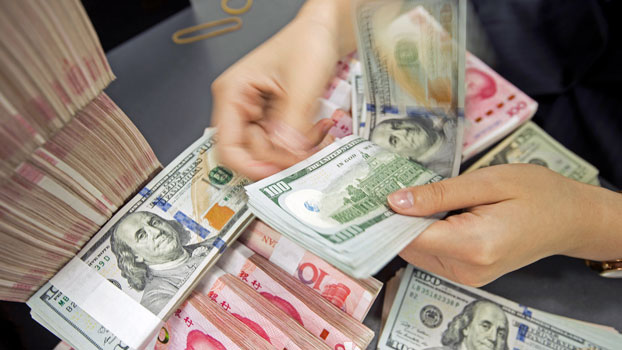 On Aug. 20, banking regulators reported an "uncommon" 9.4- percent drop in net profits for China's commercial banks in the first half of the year to 1 trillion yuan (U.S. $144.5 billion, the official Xinhua news agency said.

The average return on bank assets fell 0.15 percentage points at the end of the first quarter to 0.83 percent at midyear, according to the China Banking and Insurance Regulatory Commission (CBIRC).

The official ratio of non-performing loans (NPLs) climbed to a decade high of 2.04 percent at the end of the first quarter, the CBIRC reported in mid-June.

At the time, the agency urged banks to make "a bona fide classification of their assets, truthfully exposing their NPLs."

"Any actions aimed at glossing over bad loans and manipulating their balance sheets will be resolutely dealt with," the CBIRC warned. So far, there have been few signs that an industry-wide reform is in the works.

The wording of the statement in June suggested a firm but cautious approach.

Regulators said they would "guide" banks to set aside adequate loan loss provisions in case of defaults.

As of the end of the second quarter, commercial banks had raised loan loss reserves to 5 trillion yuan (U.S. $722.6 billion), or 182.4 percent of presumed loans at risk.

But the cushion appears somewhat smaller, based on statements by CBIRC Chairman Guo Shuqing in a Xinhua interview reported by the South China Morning Post on Aug.
13.

That would put set asides slightly below the 150-percent "red-line" level unless provisions are increased.

In the past week, Reuters reported that all of China's top banks expect further pressure on profits as "forebearance policies" on bad debt expire.

"The external challenges in the second half are unprecedented," said Wang Jiang, president of Bank of China Ltd.

The rise in problem debt was "inevitable" because of the COVID-19 crisis, said Guo, predicting that the effects would spill over into 2021.

"As many loans are rolled over, some problems will only emerge next year," he said.

The quote appeared to imply that banks would prefer to roll over at-risk loans rather than classify them as non- performing and drive businesses into bankruptcy.

Critics have long decried the practice in normal times, particularly in the case of under-performing state-owned enterprises (SOEs) that have been supported by loan extensions year after year.

China's relatively low NPL ratios have long been a point of contention with financial analysts and institutions, including the International Monetary Fund.

In a 2016 report, Fitch Ratings Inc. estimated that actual NPL ratios could be as high as 15 to 21 percent at a time when China's regulators put the ratio at 1.8 percent.

"The solvency of the banking system is a state secret," said Derek Scissors, an Asia economist and resident scholar at the American Enterprise Institute in Washington.

"Nothing said publicly is anywhere close to accurate," Scissors said.

On Wednesday, a Fitch statement voiced a mixed view of the outlook for China's banks as a result of rising provisions and their impact on profits.

"Continued NPL recognition and resolution should help prevent a further build-up of credit risks in the system, and we view these factors as having a more lasting impact on our assessment of China's operating environment than near-term profitability pressures," the rating agency said.

While the official NPL ratios may be only a token of bad loan problems, the reported 4.5-percent rate for the manufacturing sector at the end of the first quarter was more than double the rate for all bank lending, suggesting deeper troubles for industrial production.

But with government pressures to recover from the pandemic, banking regulators had openly called for extending more credit to smaller enterprises with outstanding loans that could already be classified as NPLs.

The loosening followed months of complaints from smaller businesses about limited access to credit.

The CBIRC "will appropriately increase the tolerance for potentially non-performing loans granted to micro and small enterprises," said Vice Chairman Zhou Liang at a press conference in February, as reported by the official English- language China Daily.

"It will also encourage banks to establish long-term institutions that will lend to small businesses, increase their willingness to lend, and enhance their lending capabilities," Zhou said.

On Aug. 25, a CBIRC official told reporters that the risk of loans to small and micro-sized businesses was "generally controllable."

Bad loans to small enterprises had risen 9.5 percent so far this year, said senior economist Li Junfeng, while the NPL ratio for the segment reached 2.99 percent, 0.88 percentage points higher than the ratio for all loans.

The statements are a reminder of how heavily the government has relied on bank lending to revive the economy, forming a second leg of support along with tax cuts and other fiscal policies.

State media have portrayed the deteriorating condition of China's banks as a result of their altruism rather than a consequence of government policy and control.

The loss of profits "was not due to worsening operational capability of commercial banks, but the result of intensified endeavor to share profits with the real economy," said a researcher at the National Institution for Finance and Development, as quoted by Xinhua.

While the condition of China's banks may depend on the actual extent of bad loans, the government has signaled that it believes that the worst of the economic crisis is over and that pressures on banks may be gradually reduced.

"China has suspended its large-scale monetary easing, as the economy is recovering, and shifted to innovative monetary measures to channel funds into weak sectors in more targeted ways," China Daily reported on Aug. 19, citing analysts' views.

"The PBOC (People's Bank of China) noted the focus in the second half is to ensure monetary policy becomes more precise, and China may pull this off, although history suggests that monetary policy is a blunt tool rather than a scalpel," said Shaun Roche, Asia-Pacific chief economist for S&P Global Ratings, as quoted by China Daily.

But Guo's remarks may be taken as a sign that bad debt disposal will take place only carefully and gradually with demands for more targeted credit measures extending NPL "recognition and resolution" well into next year.