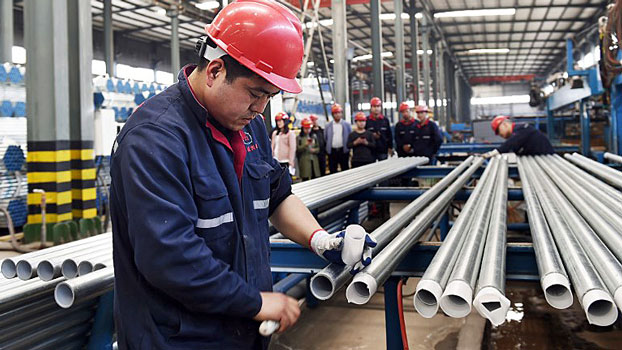 As China's economic growth falters, policy makers may have something else to worry about. Prices are falling in the industrial sector, raising the risk that deflation could take hold.

In January, The Wall Street Journal's "Heard on the Street" column highlighted the links between China's stubborn industrial overcapacity and plunging price growth. Producer prices edged up only 0.9 percent in December from a 2.7-percent gain in November, it said.

Iron and steel sector prices fell for the first time since 2006 despite several years of capacity cutting, while nonferrous metals dropped for the fourth month in a row, according to the paper.

China ended its previous four-year slump in the Producer Price Index (PPI) in 2016 with a combination of heavy stimulus spending and overcapacity cuts, but the effects have since faded with the softening of economic growth.

China's latest PPI doldrums could be bad news for industries around the world.

"Beijing's 'supply-side reforms' helped reduce global overcapacity for a while, particularly in the steel industry.

But they probably weren't deep enough to stave off a significant decline in global material prices, now that China's economy is weakening and the benefits of previous stimulus efforts have mostly warn off," said The Journal.

Nearly a month later, almost as if on cue, China's National Bureau of Statistics (NBS) reported that most of the produced goods monitored by the government recorded lower prices in the last 10 days of January compared with the previous 10-day period.

Days later, the NBS reported that the PPI continued to slip, posting a gain of only 0.1 percent in January from a year before as price growth stalled.

"That's not surprising," said Scott Kennedy, senior adviser on China studies at the Center for Strategic and International Studies in Washington.

"Even with substantial support for buyers, Chinese industrial policy often overshoots likely demand. That's clearly the case in a large number of commodities and even finished goods, from steel to electric vehicles," Kennedy said.

The country has struggled with industrial overcapacity through good times and bad, but weakening economic growth has left it particularly vulnerable to producer price declines.

But annualized growth in the fourth quarter fell to 6.4 percent, and many economists believe the actual rate was lower.

China's steel sector has had the highest international profile among overcapacity industries in the past several years.

In 2016, the NBS estimated that China's crude steel production capacity stood at 1.27 billion tons. Faced with heavy losses and low prices, the government ordered the industry to shed 150 million tons of capacity by 2020.

The industry claims to have closed 300 million tons of outmoded and substandard capacity since the campaign began.

But in January, the China Iron and Steel Association (CISA) conceded that capacity is still essentially fluid because manufacturers reopen old lines at will to take advantage of price hikes, Reuters said.

In times of weaker demand and financial losses, China's steelmakers have increased production in hopes of driving competitors out of business, aggravating the overcapacity and price problems.

Steel markets have also responded to reports of capacity cuts by pushing up prices, prompting the industry to produce even more.

But on Feb. 8, a CISA report noted a drop in steel product prices in January, predicting it would continue until the end of March.

"The world economy, as well as the steel market, have already entered a cyclical adjustment process," said the report.

Competitors and analysts are worried about a longer-lasting effect, according to Bloomberg News. China's steel demand is likely to fall by 0.5 percent to 1.5 percent this year, prompting a push for more exports, said international steelmaker ArcelorMittal in a conference call. 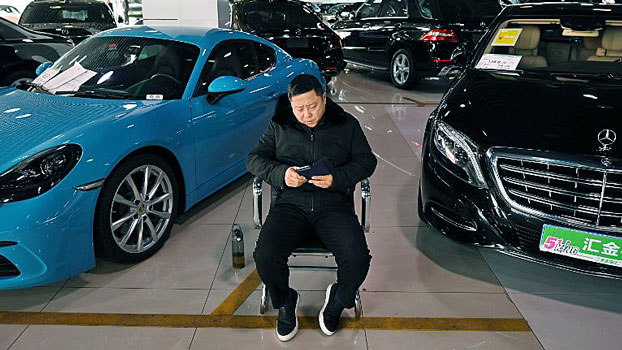 A sales representative waits for customers in a luxury car showroom in Beijing, Jan. 22, 2019. Credit: AFP

Fears of falling prices are not limited to steel.

At the end of last year, the NDRC and the Ministry of Industry and Information Technology (MIIT) issued a notice warning of excessive expansion and price declines in alumina production, the Shanghai Metals Market news site reported.

On Jan. 10, MIIT Minister Miao Wei said the government would "strictly limit" expansion projects not only for steel but also for cement and glass. New aluminum smelters would be banned, the official Xinhua news agency said.

Several sectors have been dragged down by the 2.8-percent drop in 2018 auto sales, the first annual decline in over two decades. The falloff continued in January as sales plunged 15.8 percent from a year earlier, the China Association of Automobile Manufacturers (CAAM) said.

In a report cited by Reuters, the China Metallurgical Industry Planning and Research Institute predicted that domestic steel consumption would fall to 800 million tons due to weaker demand in the property, auto and energy sectors.

The broad impact of a producer price slump may raise the risk of deflation and danger for China's economy because the effects of the dreaded "D-word" can prove hard to stamp out.

When prices are falling, buyers tend to postpone purchases due to expectations of further declines. Sellers cut prices in hopes of overcoming resistance, leading to losses, contraction and a downward spiral.

Under current conditions, with high debt and overcapacity, China's government may have limited tools to respond.

"China's stimulus efforts to date are unlikely to generate sufficient demand to soak up the excess capacity," Kennedy said.

"The problem is probably not as dire as in 2015-16, but the government's ability to intervene and move the needle is restricted because debt is already high, and it has been waging a battle to deleverage that it does not want to abandon," he said.

The effectiveness of stimulus spending to boost economic growth has also diminished since the big bang of the 4 trillion yuan (U.S. $590-billion) anti-recession package of 2008-2009, leaving China with few alternatives.

A bigger push to promote exports seems unlikely to provide relief, either for overcapacity or for the economy, in light of higher tariff pressures and lower growth expectations abroad.

"Anxieties are likely to persist for some time, particularly given the additional uncertainties created by U.S.-China commercial tensions," said Kennedy.

The government is hoping to revive the economy with stimulus at the consumer level with 24 measures to increase consumption of autos, household appliances and online shopping, the official English-language China Daily said.

The Consumer Price Index (CPI), which is heavily weighted toward food, rose 2.1 percent last year, faster than the 1.6-percent rise in 2017, but well within the government's target rate of 3 percent, the NBS said.

In January, CPI growth weakened further to 1.7 percent year-on-year, while the rise in core CPI remained at 1.9 percent, according to a Nomura Holdings report cited by Xinhua.

China will have a real economic currency melt down, and then won't be able to launch their missiles at USA along with their Russian, Iran, and North Korean allies this fall the way they would like to anyway.