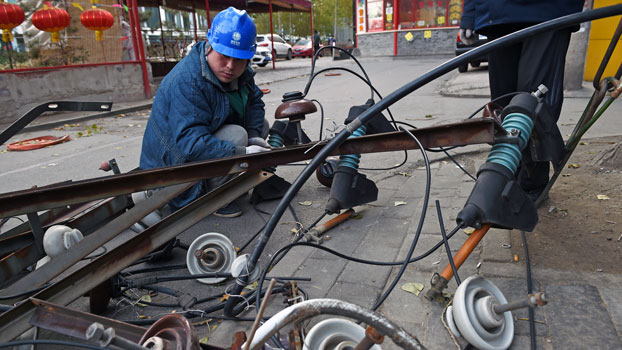 The pace of China's power consumption has dropped sharply this year, raising doubts about official data on industrial production and economic growth.

Electricity use of 566.5 billion kilowatt hours (kWh) in May rose by only 2.3 percent from a year earlier, the National Energy Administration (NEA) said, marking a steep decline from the 11.4-percent growth in May 2018 and the 8.4-percent rate for all of last year.

Official reports last year cited a spring heat wave and demand for air conditioning as reasons for the consumption spike in May 2018, creating a high base for comparison and lower growth for the month this year.

But the slowdown has extended beyond one month's results.

In the first five months of this year, power use rose 4.9 percent from a year earlier, down from 9.8-percent growth in the comparable 2018 period, the National Development and Reform Commission (NDRC) said.

Monthly readings of power consumption in the industrial sector have grown progressively weaker with a year-on-year rise of 3.8 percent in April followed by a 0.5-percent increase in May.

The nearly-flat figure for May compared with a jump of 10.9 percent in the sector a year before.

Consumption climbed last year as the government cut electricity prices for commercial and industrial customers in an effort to keep economic growth from falling below 6.6 percent.

This year's plunge in electricity growth is likely to have implications outside the power sector. A report by the official Xinhua news agency on June 17 called electricity consumption "a key barometer of economic activity."

Despite the significance, the report offered no economic explanation for this year's deep dive in power sector growth.

Three days earlier, a headline in the official English-language China Daily reported that "Economic indicators remain stable," citing a statement by the National Bureau of Statistics (NBS) that glossed over evidence of weakness.

In previous state media reports this year, stability has become a code word for gradual decline.

The stability label seems to fit the recent official results for industrial growth, which have slowly eroded, but the electricity numbers suggest that the weakening of production could be significantly worse.

In five-month figures, industrial output rose 6 percent, down from 6.9 percent in the comparable period of 2018.

Further evidence of softening is seen in the latest official Purchasing Managers' Index (PMI) score of 49.4 for June, the same as in May. It was the second month in a row that the survey fell below the 50-point threshold between expansion and contraction in manufacturing.

The major slippage in power consumption growth raises doubts about how gradual the industrial decline really is.

Looking at it one way, it took a 10.9-percent rise in electricity use to generate a 6.8-percent increase in production in May 2018, but only 0.5 percent more power to yield 5 percent more output a year later.

One possible answer is a big gain in energy efficiency.

But much greater gains in efficiency would be needed to explain the electricity and output data for May.

Nothing of the magnitude suggested by this year's power and production numbers could have taken place so quickly, said a China energy expert who asked not to be identified.

"Energy efficiency is trotted out whenever power consumption slows. Then it vanishes when consumption picks back up," said Scissors.

"If the only evidence is power consumption slowing, it's nonsense," he said.

Scissors pointed to a big drop in China's auto production as a major factor in the industrial output numbers after a downturn in sales last year.

If auto manufacturing is energy-intensive, the slump could explain the reduction in power consumption growth, he suggested.

Another possibility is that China's industries have dramatically increased the value of manufactured products. 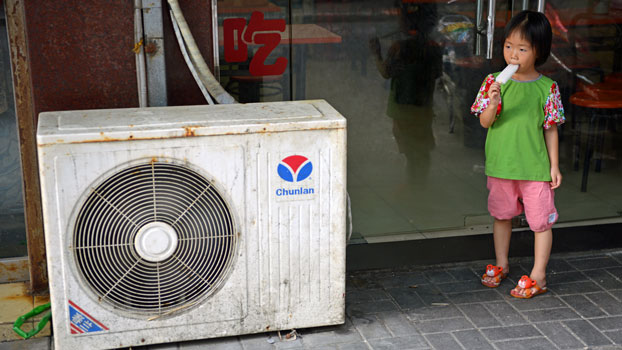 A young girl eats an popsicle while standing next to an air conditioning unit during a heat wave in Shanghai, China, in a file photo. Credit: AFP

The government frequently cites success in turning the economy toward higher-value production, a process that has taken place over the past decade or more.

China "fully implemented the new development philosophy, (and) conformed to the requirements of high quality development," the NBS said its economic report for the first quarter.

The agency noted that the value added of high-tech industries rose 7.8 percent from a year earlier, exceeding the overall industrial output growth rate of 6.5 percent for enterprises with more than 20 million yuan (U.S. $2.9 million) of annual revenue.

In its five-month report, the NBS cited further progress in high-value production. The value added of high-tech manufacturers climbed 9.4 percent during the period, beating the broader measure of production growth by 4.4 percentage points, the NBS said.

But even taking such increases into account, the transition to higher-value manufacturing has been too gradual to account for the huge gain implied by the power-to- production ratio in May.

For all the progress that China has made, the shift toward higher value remains a work in progress, with the aspirational goals of the government's controversial "Made in China 2025" plan.

"Despite the commitment to realizing a high-tech future, China seems to be unable to undertake a relatively speedy transition to higher value-added economic processes. This is apparent, for example, in the continuing overcapacity in steel, cement and coal industries," said India's former foreign secretary, Shyam Saran, writing in the Business Standard in January.

Instead, the NBS may be overstating the value-added growth of industrial output, the unidentified energy expert said.

Exaggeration may be the only explanation for the big change in the power-production relationship this year.

In January, NBS Director Ning Jizhe vowed increased efforts "to prevent and punish the falsification of data," China Daily reported, echoing similar pledges by a succession of officials over the past decade.

Ning promised tougher inspections and law enforcement to "expand the exposure of wrongdoers and hold them accountable" to improve the accuracy of NBS data.

As with many cases before, the agency pledged "zero tolerance" for statistical fraud.

But the latest reports on power usage and industrial output may be signs that the problems go beyond isolated cases of data-faking in remote areas far from Beijing.

The numbers suggest that the inflation of industrial output is an institutional problem that may be increasing with pressure to report "stable" growth.