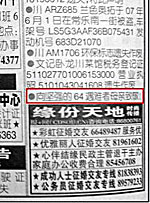 HONG KONG—Chinese authorities have released a man placed under house arrest after he took out a classified ad in a local newspaper marking the 18th anniversary of the Tiananmen Square crackdown.

Dazhu county resident Chen Yunfei placed the one-line advertisement, which read “In support of the strong mothers of the victims of June 4th,” in the classified section of the Chengdu Evening News on June 4.

Two days later, he was detained by the Ministry of Public Security on charges of subversion and ordered under “residential surveillance” at his home in the southwestern Chinese province of Sichuan for six months.

He was released Dec. 3 when the surveillance order was lifted, and he traveled immediately to the paper to apologize to staff there who got into political trouble as a result of the advertisement.

I feel responsible because they were punished over this affair. But the biggest responsibility of all lies with this [political] system.

“I haven’t been free up until now,” Chen told reporter Shen Hua. “Now that I am free, I wanted to go and apologize to them, because they were harmed by my actions. I went to apologize to Li Shaojun, who was demoted because of this.”

Chen’s advertisement, which drew a mixture of comments on blogs and forums within China, sparked a huge internal inquiry during which many advertising executives and editorial staff were implicated.

Li was the deputy editor of the Chengdu Evening News at the time Chen took out his ad; he was later demoted and sent for retraining in Party ideology.

“I apologized to him,” Chen said. “He just said that each individual is governed by something. For him it’s the current regime; for me it’s freedom and democracy.”

Huang Xiaomin, who accompanied Chen to the newspaper offices, said he found the editor’s reply illuminating.

“It really is an important idea in democratic politics today, or way of life. It’s certainly an improvement on the Party’s monopoly on power, or indeed on the me-cult of extreme individualism. I think it contains a certain amount of tolerance towards other points of view.”

Huang said he and Chen had also planned to visit the company that ran the advertising department for the paper to apologize to the members of staff who got into trouble as a result of the advertisement, which he placed through them in the first place.

But the company had already folded and a new one had taken over the contract.

Staff too young to know

He said the reason Chen had managed to place the ad in the first place was because the staff in the advertising company and in the editorial department of the newspaper were all in their 20s and too young to associate “June 4th” with the events of 1989.

Later reports had said the advertising company employee who had placed the ad for him—a fresh graduate—had lost her job.

Huang said Chen’s apology was prompted by the remarks of a few friends in his immediate circle, and among commentators online, blaming him for implicating innocent people in his actions.

The incident was reported by prominent Chinese bloggers, including Wang Xiaofeng, who wrote: “On this day of (Sensitive Word), Chengdu Evening News had an accident, a very serious case. Later we saw that it was an advertisement in the classified section, just one sentence.”

Wang’s post drew comments from some who had never heard of the crackdown on student-led protests on and around Tiananmen Square on the night of June 3, 1989, during which hundreds, perhaps thousands, were killed by People’s Liberation Army troops in tanks.

Others felt that the crackdown was irrelevant, boring, or had been necessary to maintain stability. Still others noticed for the first time how hard it was to find information on Internet search engines, owing to efficient filtering of “sensitive words.”

In spite of all his apologizing, however, Chen said he had no regrets about taking out the advertisement out in the first place.

“I feel responsible because they were punished over this affair. But the biggest responsibility of all lies with this [political] system.”

Original reporting in Mandarin by Shen Hua. Service director: Jennifer Chou. Translated and written for the Web in English by Luisetta Mudie. Edited by Sarah Jackson-Han.