A North Korean mother laments seven years of separation from her son.
2009-09-22
Tweet 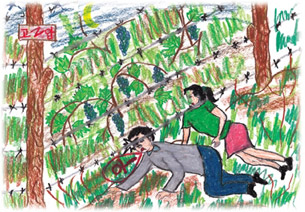 Drawing published in Jang Gil-su’s "The Rainbow I Painted with My Tears." Jang was 15 when he escaped North Korea in January 1999. His mother was caught and repatriated.
Courtesy of Jang Gil-su

Kim Choon Ae (a pseudonym) left her North Korean hometown, along with her younger daughter, in October 1997, to search for her older daughter who had fled to a Chinese border town to escape food shortages at home. Intending to return home soon, she left her husband and young son behind. While she was away, her husband was arrested and banished, along with their son, for engaging in illegal business activities to make ends meet.

When her husband became ill and died, the son was left homeless and living on the streets. Kim and her son were reunited in 2003, when he crossed into China. Kim and her three children escaped soon afterward to South Korea through a route she won’t disclose. After listening to a radio interview with her son, she was moved to write this broadcast essay for RFA’s Korean service.

SEOUL—Rain was falling heavily, in massive drops. On a day like this, the best thing to do is have some pancakes and rice wine, in a warm room with a heated floor, and then take a nap.

But then I came across an interview with my own son.

As I listened, tears ran down my cheeks like the heavy raindrops outside. As a child, he had to pick up leftover bits of food from the dirt, at train stations, and in parks and other public places. While listening to his story, images of those tormenting times flashed before my eyes.

Homeless, hoping to shield himself from the cold winter weather, my son had to sleep wrapped up in a plastic sheet, while we were being brainwashed about South Korea.

After his father died, my son had to struggle for to survive seven years, until we met again.

I could barely look him in the eye, as I recalled how he had spent those years, when he should have been studying, growing, and playing, protected in his mother’s embrace.

Instead, he had to spend all that time away from me.

It hurt to remember that maybe he could have had better parents, that the experiences scarring his soul had been so harrowing.

As a mother, I thought that being able to bring my children to South Korea was supreme happiness.

But listening to the unbelievable hardship my son had endured, in his own words, was hard to take.

I felt deeply sorry for the difficulties he had had to struggle through.

'Bring him up right'

At an early age, my son learned the priceless value of freedom.

He barely escaped death by starvation at Labor Camp No. 9, as he was given only enough food to barely survive, and every day he saw other children starve to death at his side.

But this is the hard truth not only for my son, but for countless other children back home in North Korea.

While my son was in the hospital, as I was feeding him grass porridge, a Defense Ministry official told me, “Lady, he’ll grow up to be a great man. Bring him up right.”

I don’t mean to boast, but my son really managed to overcome very hard times.

Having watched him mature despite enormous hardships, I no longer fear anything in this world.

I still deeply regret not having been able to love him and care for him while he was still in North Korea, but for the rest of my time on Earth, after all the hardship we’ve endured, I will do my best to cherish the family with whom I was fortunate enough to be reunited.

I will make a vow for my hometown, once it is liberated, and once reunification becomes reality. I will return there and establish a welfare center for children and a home for the elderly. I will seek redemption for my failure to look after my child for so many years by looking after North Korean orphans and senior citizens.

I think unification isn't far off. Our beloved children, stay healthy and wait for that blessed day.