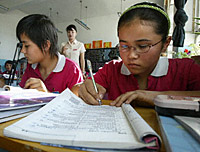 September 13, 2004: Uyghur students listen to their teacher in a classroom in Korla in western China's Xinjiang region. Photo: AFP

Official media in the Muslim-majority region describe the practice as a work-study program, but sources who spoke on condition of anonymity say students must meet specified targets or face fines.

A teacher at the Shihenzi Higher Middle School in Shihenzi City told RFA’s Uyghur service that Muslim Uyghurs, minority Kazakhs, and Han Chinese children alike were forced into “work-study” programs on behalf of the army’s Xinjiang Production and Construction Corps, known in Chinese as the bingtuan .

Sometimes because of the pesticides used on the crops, while kids are working on harvesting the cotton, their fingers and fingernails get damaged badly and start to come out. Some kids get splinters in their hands. Some will have allergic reactions and their faces swell. But there are no excuses for missing the harvest.

An official at the Xinjiang Education Committee in Urumqi also voiced concerns about the nature of the work assigned to children and youths but said the requirement came from Beijing and had to be enforced.

“We know it’s hard for students to do such a heavy work. But we have no choice,” said the staff member, who asked not to be named.

“But this is an order from authorities in Beijing. And we have to follow it—we cannot change these rules. If you have any suggestion or question, you can call them and say what you want to say.”

The teacher said he and his colleagues faced pressure to push the children to meet targets and that they were appalled at conditions in the camps, where children would stay in dormitories for up to six weeks.

“Sometimes because of the pesticides used on the crops, while kids are working on harvesting the cotton, their fingers and fingernails get damaged badly and start to come out. Some kids get splinters in their hands. Some will have allergic reactions and their faces swell,” the teacher told RFA. “But there are no excuses for missing the harvest.”

The children were typically awakened at 6 a.m. and worked in the fields until dark, with only half an hour’s break for lunch, he said.

“Poor children, they carry those very large bags filled with cotton and bring them to the checkpoint for measuring for their daily quota. The girls, young kids, they bow down to the ground when they carry those heavy bags.”

This year, nearly 100,000 students from junior colleges, technical, secondary, and primary schools in Xinjiang will participate in the work-study program and join the cotton-picking work in various cotton districts before Sept. 11.

“If any of those parents were to witness their children working in the cotton fields and carrying such heavy cotton and barely being able to walk with it, their hearts would break and they would weep,” the teacher said.

Official media largely corroborate the teacher's account, but they justified the practice in the face of parents’ concerns.

“This year, nearly 100,000 students from junior colleges, technical, secondary, and primary schools in Xinjiang will participate in the work-study program and join the cotton-picking work in various cotton districts before Sept. 11,” said a report in the Urumqi Evening News Sept. 12.

The report, also carried on the official Xinjiang News Web site, said children below third grade would not be allowed to participate.

“The Work-Study Office of the Education Department also requested the schools to refrain from collecting fees recklessly in name of the work-study program. Extremely heavy labor was also strictly forbidden,” the paper said.

The office would carry out inspections of work-study programs, which should last no longer than a week and be near the children’s home. It also requested that schools “refrain from collecting fees recklessly in name of the work-study program. Extremely heavy labor was also strictly forbidden,” the report said.

Parents and students who called a hotline of the Urumqi-based Metropolitan Consumer News voiced concerns about the heavy nature of the work and expenses charged to students for taking part, the paper said on the Tianshannet Web site.

A staff member at the newspaper who asked not to be identified told RFA’s Uyghur services numerous parents had phoned to complain about the practice.

“There are strict rules and disciplinary measures regarding work in the cotton fields. These rules are set by the Xinjiang Education Committee. We think it’s unfair that students have to do that kind of heavy work—that’s why we reported on this.”

“Some schools in inner China spread the course out into weeks and months and carry it out at training facilities. However, the situation in Xinjiang is unique. Apart from the lack of training facilities, the picking-period of various cotton districts in Xinjiang is concentrated in September and October, thus the work-study program has to be carried out mainly during this time,” the paper quoted officials as saying.

Parents and students told the paper they were also concerned with on-site safety during the harvest, and with the high harvesting quotas. They also feared that their children’s work might suffer.

The Shihenzi teacher said children were extremely vulnerable to accidents while sleeping in unfamiliar dormitories, riding on farm equipment and the young girls especially to sexual assault from migrants working in the nearby fields.

“Every year, there are incidents like this and someone dies in an accident. Sometimes the tractors let kids get on and then crash with cars, and the kids get badly hurt or die,” he told RFA reporter Mehriban.

“Also when it is harvest season there are many migrants Han Chinese workers or farmers from other Chinese cities and those people rape the female students. These kinds of cases take place often every year.”

“There is no guarantee of safety or property living conditions over there,” he said.

One Uyghur youth said he and a friend, both in 8th grade at the time, ran away from their work in the cotton fields in 1999 and never returned to school. All the students were warned they would be fined if they failed to meet their cotton quota, he said.

The youth, who asked not to be named, said he and his classmates spent 45 days picking cotton in two towns, which he identified as Bortala Sasanza (in Chinese, Boertala) and Jing (in Chinese, Jinghe).

Meeting the quota “was difficult because the cotton wasn’t good enough. There was too little,” the youth said.

“Many students had stomach pains and problems because of the bad food. Many of them fell ill. So we decided to run away. First we told our families on the phone. Our parents told us it was better to get permission from the teacher. But the teachers never allowed us to leave, so we had to run away. We never went back to school—if we did, we would be punished severely—paying for what we didn’t pick and being criticized by the school officials.”

“The food was really, really bad. It was just cabbage in boiling water. And the weather was so hot. We were there for 45 days. The accommodations were also very bad. No roof, only the walls. Usually they put a plastic sheet on the ground but sometimes we had to sleep on the wet ground. Many students got sick.”