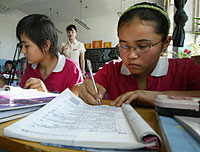 Uyghur pupils in a classroom in Korla, Sept. 2003. China is stepping up Chinese-language training for Uyghur teachers. Photo: Files/AFP

"The worldwide campaign against terrorism has given Beijing the perfect excuse to crack down harder than ever in Xinjiang," Brad Adams, Asia director for Human Rights Watch, said in a statement.

More from RFA on Beijing's 'War on Terror'

"Other Chinese enjoy a growing freedom to worship, but the Uyghurs, like the Tibetans, find that their religion is being used as a tool of control."

The report, titled Devastating Blows: Religious Repression of Uighurs in Xinjiang , is based on previously undisclosed Communist Party and government documents, as well as local regulations, official newspaper accounts, and interviews conducted in Xinjiang, a statement on the Human Rights Watch Web site said.

More from RFA on religious controls on Uyghurs

State authorities politically vet all imams on a regular basis and require "self-criticism" sessions, impose surveillance on mosques and purge schools of religious teachers and students, the report said.

Beijing also screens literature and poetry for political allusions, and equates any expression of dissatisfaction with its policies with "separatism"—a state security crime under Chinese law that can draw the death penalty, it said.

More from RFA on suppression of Uyghur literature

Uyghur activist Rebiya Kadeer, released last month by the Chinese authorities ahead of a key diplomatic visit, appealed on her arrival in the United States for international help for Uyghurs under Chinese rule.

While critics said her release was a token gesture in return for Washington's withdrawal of a motion criticizing China at the United Nations Human Rights Commission in Geneva, Kadeer pledged to use the rest of her life to bring the Uyghur cause to the attention of the international community.

Original reporting by RFA's Uyghur service, directed by Dolkun Kamberi. Produced for the Web in English by Luisetta Mudie.