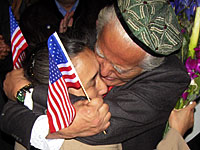 >> See the slideshow: Face of Freedom

WASHINGTON--China's decision to free prominent Uyghur businesswoman Rebiya Kadeer ahead of an important diplomatic visit should not be mistaken for an improvement in its human rights record, rights activists told RFA.

Kadeer's release was part of a long-term pattern of 'hostage diplomacy', and the international community should keep up pressure on Beijing to end its persecution of prisoners of conscience, they said.

"When the Chinese government comes under very strong pressure from international public opinion, or if it suits Beijing's own foreign policy needs, it will release one or two well-known prisoners of conscience," Zeng Ning, a dissident based in the southern province of Guizhou, said in a panel discussion on RFA's Mandarin service.

'Hostage diplomacy' is inextricably linked to the government's continuing abuse of human rights at home. It's two sides of the same coin," Zeng said, urging the international community not to imagine that Kadeer's release signalled any real changes.

"This happened basically because China was feeling the pressure of potential strong international criticism [at the United Nations Human Rights Commission in Geneva], and it has a lot to do with the visit to China of the Secretary of State," he said.

U.S. officials confirmed on the day of Kadeer's release that they had dropped plans to table a motion at the U.N. criticizing Beijing's rights record.

The Chinese government has long regarded the Chinese people as pawns in their political game.

And one negotiator who helped free Kadeer, U.S. businessman-turned-activist John Kamm, said Chinese officials had rushed to let her go ahead of the visit by Secretary of State Condoleezza Rice, who arrives in Beijing this weekend.

Beijing makes a habit of releasing relatively well-known dissidents ahead of key diplomatic visits, and Kadeer's release should not be mistaken for anything more than a political gesture, said Zhang Xianliang, of the U.S.-based Amnesty International China branch.

"So I think it's right when human rights groups say that this is an exchange of hostages...It is in itself a form of human rights violation," Zhang added.

As described by Kadeer herself in an interview with RFA's Uyghur service, dissidents imprisoned in China rarely know that they will be released until close to the time of their departure.

This happened basically because China was feeling the pressure of potential strong international criticism [at the United Nations Human Rights Commission in Geneva], and it has a lot to do with the visit to China of the Secretary of State.

They are often bundled onto a flight to the United States on medical parole, sometimes a plausible excuse given that their health may have deteriorated greatly in a Chinese labor camp.

Some, like former 1989 student leader Wang Dan, arrive expecting to continue to work for political change from overseas, and begin by pursuing academic careers.

Many have reported being warned not to cause trouble overseas before they leave, by officials who threaten dire consequences for any relatives they leave behind in China.

No improvement in China's rights record

Others, like China Democracy Party (CDP) founder Wang Youcai, talk initially about returning to China following medical treatment. Most who try to return are turned back at the border, like Hong Kong-based labor activist Han Dongfang.

"I think the international community needs to be very clear about what is happening here," Zhang told RFA.

"On the one hand, they release one or two people ahead of a visit by the Secretary of State, and on the other, they are busy stepping up controls on dissidents, religious followers, the Falungong [spiritual movement], and so on, and even putting them under house arrest. "

Zhang said U.N. human rights inspectors had visited China in 1996, making a number of suggestions for improvements in human rights there. But when they went back for a second visit in 2004, not a single one of their suggestions had been implemented.

"We can see very clearly that even though China is a signatory to the U.N. human rights covenants, it does not observe them. So the international community must point the finger and criticize China to make it observe those covenants which it has signed. This is the most important thing. It isn't just a question of releasing one or two people," he said.