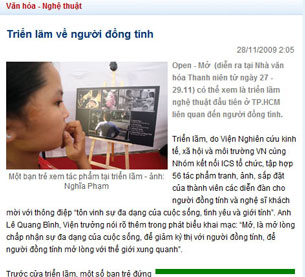 A screenshot of a Nov. 28, 2009 article taken from Thanh Nien Newspaper Online depicting an exhibit on homosexuality and art in Ho Chi Minh city.
RFA

BANGKOK—Communist-ruled Vietnam is home to an increasingly vibrant gay community, but homosexual men who "come out" and acknowledge their orientation are still subject to social stigma and workplace discrimination.

Hanoi-based college student Vu Tung is one of a growing minority of openly gay men, and currently runs a support group for men who have sex with men in the capital.

"In reality, in Vietnam, the issue of homosexuality is not talked about, except by only a few groups like the transgendered, or those who are openly gay," Tung said.

"The openly gay community runs into a lot of difficulties, like the inability to find work in government agencies and companies," he added.

Instead, men who have sex with men tend to keep their preferences secret, even from close friends and family, living lives that appear to conform to heterosexual norms.

"If we come out, the first reaction we will have to face will come from our families," Tung said.

"Those who are in school will run into difficulties there in the form of discrimination, isolation, and an inability to fit in and be accepted by classmates."

Nguyen Chung Tai, a volunteer at another Hanoi-based support group for men who have sex with men, said most members of the gay community in Vietnam are still not openly gay, and many cave in to strong social pressure to marry.

"Many men whom I... help as a consultant are actually gay and don't want to get married, but still do because of family pressure," Tai said.

"In one of the cases... a gay man who had to get married said that on his wedding night he was disgusted by just looking at his bride. He did not have any feelings of love for her. After six months living together, they filed for a divorce," he said.

Gays and the law

The nongovernmental organization Care estimates that between 50,000 and 125,000 men in Vietnam prefer male sexual partners.

Vietnam has no law banning homosexuality nor any law prohibiting discrimination on the basis of sexuality, but while the Vietnamese media cover homosexuality more frequently, gay men are often referred to as "sick" or victims of a trend.

"To me they are not normal. I don't like people who are like that because they express themselves and dress so strangely," Huyen said.

"Some of them look so disgusting and so openly gay. Nobody can accept them here," she said.

However, in a 2007 survey conducted by the University of Pedagogy in Vietnam's southern Ho Chi Minh City, 80 percent of students polled answered "no" to the question, "Is homosexuality bad?"

Most students responded that each person is entitled to his or her sexual orientation or that being gay is not a choice.

Bui Xuan Ha, manager of the Hai Dang Gay Men's Organization, said his group is trying to make new contacts, as well as provide guidance about the use and distribution of condoms, ointments, and information pamphlets.

"Through these activities we can better understand the risks of individual members and provide them with good health-care services," he said.

Vietnamese authorities initially interfered with the activities of groups like Hai Dang because they believed the groups existed only as "homosexual love clubs."

According to Hai Dang counselor Nguyen Van Nam, "they didn't understand our activities or our purpose."

"Our second difficulty has been that our members and volunteers still suffer discrimination from the rest of society. Only recently have we seen less prejudice as a result of our efforts to educate the public," he said.

According to the United Nations, around one-tenth of the 26,000 gay men in Hanoi were infected with HIV in 2008, while a recent U.S. State Department Human Rights report said Vietnam's homosexual community exists largely underground.

The gay community in Vietnam was only officially recognized after HIV-AIDS appeared in the country during the early 1990s, when the government issued a number of decrees aimed at preventing the spread of the disease.

In 2002, the Ministry of Labor, a disabled veterans organization, and other civil groups launched a campaign to categorize homosexuality as a "social evil" to be abolished, much like prostitution and drug abuse.

Soon after, the Central Executive Committee of the Communist party issued Order 54, which officially listed the MSM, or Men who have Sex with Men, community as at risk for contracting HIV-AIDS.

In a report released in June this year, New York-based Human Rights Watch said that homosexual conduct is not criminalized in much of East Asia because many governments refuse to acknowledge that it exists.

But gay men in China were considered criminally negligent for soliciting in public places until the removal of a reference to "hooliganism" from the country's criminal code in 1997.

Homosexuality wasn't removed from the official list of mental disorders until 2001.

Human Rights Watch said the spread of HIV often made conversations about sexuality possible for the first time, opening the door to Lesbian, Gay, Bisexual, and Transgender activism in many countries.

Unlucky for those who were born in these countries; China and Vietnam. These animal regimes will not care for people benefit, they will put you to jail or torture you if you're gay or lesbian. They will only suck people blood and enrich their families. Soon there will be no more communists in the world, Tibet and Khmer Krom will be free in determination on their hometown. North Korea will surrender and reunite with the South as well as Iranian, Burmese people will be the lord of the land.