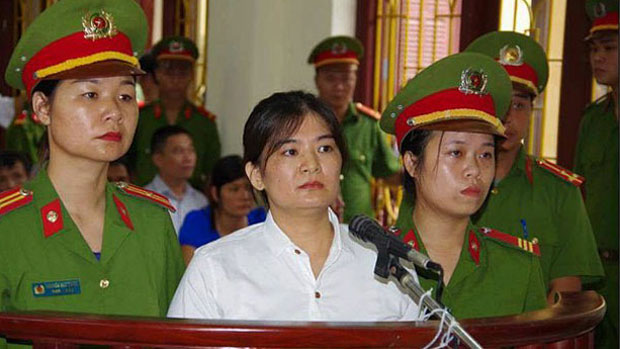 Vietnamese political prisoner Tran Thi Nga has been allowed to see her family in a move reversing an earlier decision by authorities to refuse prison visits to punish her for refusing “to follow prison rules,” her husband told RFA on Monday.

“She is not being ill-treated like before, but her health is not good. She has problems with her spine, which is always hurting her,” he said.

“Though prison authorities have given her some medication, they have not allowed her to see a doctor for a medical check-up.  She is in good spirits, though.”

Nga had been refused permission to see her husband and children in September when her family came to see her, her husband told RFA’s Vietnamese Service in an earlier report.

“Prison authorities told me that she had not followed prison rules and has refused to admit guilt [in the charge for which she was convicted], so they would not let her see us,” Phan Van Phong told RFA on Sept. 29.

“I asked them to at least let her see her children, but they just said no,” he said.

Prisoners in Vietnam are normally allowed monthly visits with their families according to prison rules.

Nga, 40, was sentenced in July 2017 to nine years in prison for spreading “propaganda against the state” under Article 88 of Vietnam’s penal code, a provision frequently used to silence dissident bloggers and other activists.

Her appeal was rejected in December.

Now held at Gia Trung prison, Nga told her husband in August she had been beaten and threatened with death by a cellmate assigned to her by authorities, Phong told RFA in an earlier report.

Phong then appealed for her protection in a petition sent to Gia Trung prison, the ministry of police, the supreme people’s procurator, Gia Lai province judicial authorities, and international organizations, he said.

It also controls all media, censors the internet, and restricts basic freedoms of expression.