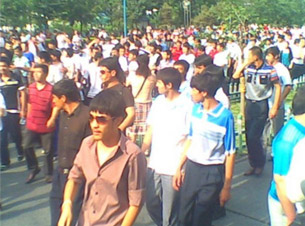 HONG KONG—A court in China has handed down death sentences to another five people for their alleged roles in deadly ethnic rioting in Urumqi, capital of the far western Xinjiang region, news agencies say.

The new trials, omitted from China’s national media, brings the number of death sentences handed down in connection with the rioting to atleast 22, of which at least nine have already been carried out.

The names of the defendants all appeared to be Uyghur. Uyghurs are a Turkic, largely Muslim people indigenous to what China now calls the Xinjiang Uyghur Autonomous Region (XUAR), many of whom bitterly resent Chinese rule in the region.

Hou declined to specify the charges, which she said were published in Xinjiang newspapers. The Internet has been blocked in Xinjiang since July, and local newspaper Web sites are inaccessible from outside the region.

Ma Xinchun, spokesman for the Urumqi city government also told AFP that five people were handed death sentences and eight given life in prison. Four more were handed sentences of 10 years or longer, Ma was quoted as saying.

Another eight people were jailed for life, according to a statement faxed by the spokeswoman.

The statement said the court was shown ample evidence in the open trials, and that more similar trials would follow.

China last week pressed Cambodia to deport a group of 20 Uyghurs, including two young children, who fled after the July riots and sought asylum with the U.N. High Commissioner for Refugees (UNHCR) in Phnom Penh.

Cambodia said it expelled the Uyghurs because they had illegally entered the country. It has since been sharply criticized by Washington, which said the deportations would harm bilateral ties with the United States, though they may have strengthened relations with Beijing.

On Monday, China signed off on more than U.S. $1.2 billion in aid to Cambodia during a visit there by Vice President Xi Jinping. The assistance, including 14 agreements for grants and loans, ranges from help in building roads to repairing Buddhist temples.