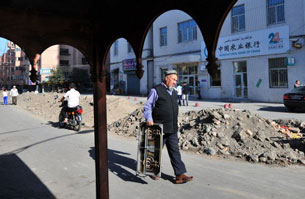 Uyghur farmers are being forced to work on road construction without pay as part of a new infrastructure policy in northwestern China, according to residents.

The Kashgar Daily newspaper said that the policy, known as “Speed up the Roads and Enrich the People,” began earlier this year.

But a resident of Kashgar prefecture’s Kargilik county, where officials had recently boasted of making significant progress on the policy’s goals, told RFA’s Uyghur Service that Uyghur farmers had been pressed into providing free labor on the road building initiative.

The source from Toguchi village, who spoke on condition of anonymity, said farmers had been made to work on the roads as many as four days a week without pay, in what some sources say is a violation of national law.

“[Authorities] are forcing farmers to work on the roads as a form of ‘unfree labor’ … [They work] two days some weeks, other times three or four,” he said.

The source said that the site of the road work was “four or five kilometers (two to three miles) away,” which required the farmers to travel there using their own donkey carts, motorcycles and other forms of transportation.

“We buy our own food,” the source said, adding that the farmers received no form of pay at all.

The Toguchi villager, who is also a farmer, said that he had taken part in the work himself and said that the number of hours required to work varied each day.

“We work until we finish the daily workload,” he said.

The source said that farmers who did not participate in the road work were fined or required to pay another laborer to work in their place.

A Kargilik official, who also spoke on condition of anonymity, confirmed that the unfree labor policy had been in effect in the county during the winter.

“If there is [unskilled] construction required, like laying pebbles on dirt roads, the farmers are deployed to do the job for free,” the county official told RFA’s Uyghur Service.

“It is not possible to do it during the busy farming seasons. It must be done when the farmers are free,” the official said when asked why the farmers had been pressed into labor during the winter, when temperatures can reach extreme lows in Xinjiang.

“Another reason for [the policy] is that if the farmers are left free, the government would worry that they might make trouble,” he said, noting a number of what he called violent attacks carried out by Uyghurs in recent years against Han Chinese immigrants to Xinjiang.

The official also confirmed that farmers who refuse to work on the roads face fines, which he said could be “infinitely high.”

“There is no set amount. Their lives are very difficult.”

When asked about the funds allocated for the project by the Chinese government, the official said that he “[did] not know about that,” adding only that he frequently traveled to different villages on business and could see farmers working on roads all over the county.

“The government policy is very good, but whether there is money being sent to the towns, we do not know. [The orders] do not emphasize efficiency. What they are after is controlling the people, so what do you expect?”

The official said that most of the county’s roads that led from villages to regional towns were still of poor condition and that villages in mountainous areas often had no roads between them.

“[From certain villages] if you want to travel to the town center for medical treatment, you have to ride your donkey for three days,” he said.

“How can you talk about development in this kind of situation? It’s unimaginable. We are talking about this in 2012!”

But experts outside China have questioned the legitimacy of the claims, saying China has exaggerated the threat from Uyghur “separatists” and used its “war on terror” to take the heat off of domestic policies that cause unrest.

So essentially the Party has made these Uighur farmers into slaves. So much for liberation. The Party of the workers is now the Party that enslaves workers.