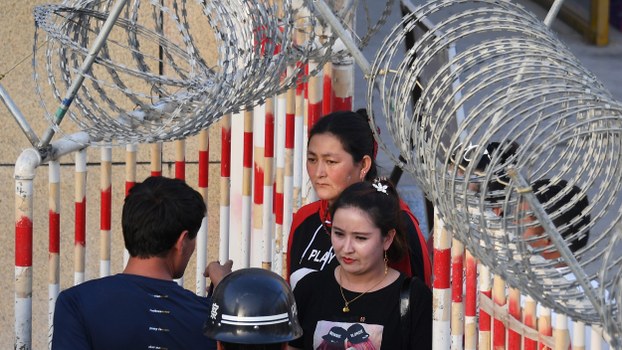 A Uyghur woman (C) walks through a security checkpoint to enter a bazaar in Hotan, in China's Xinjiang Uyghur Autonomous Region (XUAR), May 31, 2019.

U.S. lawmakers and experts have renewed calls for sanctions against China over rights abuses in its Xinjiang Uyghur Autonomous Region (XUAR), in a swift response to the leak of hundreds of pages of documents detailing a crackdown on ethnic Uyghurs and other Muslim minorities ordered by President Xi Jinping.

On Saturday, The New York Times published a 403-page trove of documents it said were released by someone within the “Chinese political establishment” that told of how Xi called for an “all-out ‘struggle against terrorism, infiltration, and separatism’ using the ‘organs of dictatorship,’” in internal speeches following an attack by Uyghur militants that left more than 30 people dead at a train station in 2014.

Xi, who visited the XUAR weeks after the attack, urged officials to show “absolutely no mercy” in stamping out Islamic extremism in the region, where authorities are believed to have detained up to 1.5 million people accused of harboring “strong religious views” and “politically incorrect” ideas in a vast network of internment camps since April 2017.

The Times said the documents, commonly referred to as the “Xinjiang Papers,” show that Beijing ordered the clampdown in part over fears related to terrorist attacks abroad and the drawdown of American troops in Afghanistan.

But they also indicate pockets of resistance within the ruling Communist Party’s ranks to the central government’s plans in the XUAR, including by a former party secretary in Kashgar (in Chinese, Kashi) prefecture’s Yarkand (Shache) county named Wang Yongzhi, who released more than 7,000 of 20,000 detainees there, citing fears that mass incarcerations would increase ethnic tension and halt the economic progress he hoped to bring to the area.

According to the documents, Wang was later detained and investigated for “gravely disobeying the party central leadership’s strategy for governing Xinjiang.”

While it was unclear how the documents were selected, the Times said that the leak came from an official who requested anonymity and expressed hope that their disclosure would hold party leaders, including Xi, accountable for policies in the region.

In reaction to questions about the report, Chinese Foreign Ministry spokesperson Geng Shuang on Monday defended Beijing’s policies in the XUAR, calling them “purely China’s domestic affairs,” and maintaining that they are in place to fight “violence, terrorism and separatism.”

Geng slammed the Times report as “completely deaf and blind,” saying it relied on “clumsy patchwork and distortion” to “smear China’s counter-terrorism and de-radicalization efforts.”

While Beijing initially denied the existence of the camps, China this year changed tack and began describing the facilities as “boarding schools” that provide vocational training for Uyghurs, discourage radicalization, and help protect the country from terrorism, and Geng reiterated those points during his regular press briefing in the capital.

Several U.S. lawmakers have since cited the report in renewing calls for passage of the Uyghur Human Rights Policy Act—passed by the Senate and under debate in the House of Representatives—that would appoint a special State Department coordinator on Xinjiang and require regular reports on the camps, the surveillance network and the security threats posed by the crackdown.

A related effort by U.S. lawmakers calls for the imposition sanctions under the Global Magnitsky Act, crafted initially to deal with rights abuses in Russia, on XUAR Party Secretary Chen Quanguo and other Chinese officials leading the repression of ethnic Uyghurs and other Muslim minorities in the region.

In a tweet on Saturday, Senator Bob Menendez of New Jersey called the information in the report “reprehensible,” and urged the House of Representatives to pass the Uyghur Human Rights Policy Act, which he introduced along with Senator Marco Rubio of Florida.

“The United States must stand up for our values, and hold accountable those responsible for horrifying human rights violations, ethnic cleansing, and bigotry,” he said.

Rubio also highlighted the report in a tweet the same day, saying it showed how Chinese authorities “ordered a cruel, ruthless & systematic crackdown on ethnic minorities” through mass incarcerations in the XUAR.

Senator Jerry Moran of Kansas highlighted the report in a tweet on Saturday, calling China’s repression of the Uyghurs “an outrage” and demanding that the House act on the legislation passed by the Senate.

Senator Elizabeth Warren of Massachusetts, a democratic candidate for the upcoming 2020 U.S. presidential election, also weighed in on Twitter, referring to China’s treatment of the Uyghurs and other Muslim minorities as “cruel, bigoted … [and] a horrifying human rights violation,” and calling on Americans to “stand up to hatred and extremism.”

The Congressional-Executive Commission on China (CECC), which is chaired by U.S. Representative Jim McGovern of Massachusetts and co-chaired by Rubio, tweeted on Monday that the Xinjiang Papers “confirm what was long known, a ruthless campaign carried out by high level officials who should face, at very least, U.S. & int’l sanctions, including #Politburo member #ChenQuanguo.”

The commission called on Congress to pass legislation to address “what are truly egregious abuses.”

The Times’ documents also drew a reaction from Marise Payne, Australia’s Minister for Foreign Affairs, who said in a statement on Sunday that the leak reinforced her government’s “strong concerns” over reports of mass detentions of Uyghurs in the XUAR and vowed to “continue to raise them both bilaterally and in relevant international meetings.”

She said the fact that the documents were leaked suggests there is recognition within the Chinese government that “what they’re doing is wrong,” but added that the report “has to be treated as grounds for urgent action by the international community, to demand access for a fact-finding mission and to bring this nightmare to an end.”

“The first order of business is to press the government in question to allow for [unfettered] access by, for example, the United Nations High Commissioner for Human Rights to investigate what’s happening in the region,” she said, noting that the documents show “culpability from the top all the way to the bottom.”

“Where there is evidence that warrants prosecution, that should move ahead. I think in the face of this kind of evidence, the world can’t pretend that China is somehow different or exempt from the same kind of scrutiny that an organization like mine and people all over the world argue for for abusive governments all over the world.”

U.S. author and commentator Gordon G. Chang told RFA that it is “absolutely critical” that China’s foreign ministry did not deny the authenticity of the documents.

“We know the context, and unfortunately, unless Xi Jinping is deposed, I’m afraid that China is going to continue an abhorrent policy in Xinjiang … because that’s just in the nature of the Communist Party at this particular time,” he said.

“These are crimes against humanity, and the international community is going to have to force China to stop this. And only with outside pressure will the Communist Party release the Uyghurs and the Kazakhs who have been imprisoned in these horrific facilities … These concentration camps are a crime against humanity, and the international community needs to hold Xi Jinping to account.”

The leaked Xinjiang Papers reveal how the CCP puts Uighurs in these concentrations camps for their beliefs. The CCP views certain religious/political beliefs as a sickness or infection that must be eradicated by force. The Uighurs are forced to love the CCP. The CCP believes you can brainwash people into accepting Marxism. It demonstrates the complete lack of freedom of speech & religion in Uighur areas (as well as in China).

It's unfortunate that the New York Times is a stranger to the truth. When they publish something important people will always have lingering questions.