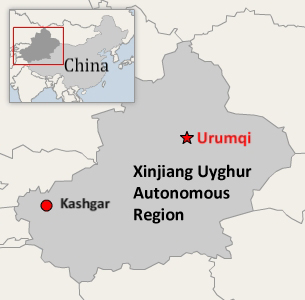 Several Han Chinese in northwestern China’s Xinjiang Uyghur Autonomous Region were killed in three attacks by ethnic minority Uyghurs this month, in a possible reflection of growing frustration over the preferential treatment of Chinese immigrants by government officials in the area.

The attacks took place in two towns within Yengishahar county, in Kashgar prefecture’s Kashgar district, as well as one in Maralbeshi county, according to police, although none were reported on by the official Chinese media or the regional government.

While there have been various speculations on the exact number killed, police said that six Chinese deaths were reported in Aral and two in Yengerik, both towns in Yengishahar county.

An officer from the Aral police station initially misunderstood a question about the killings and made reference to a number of Uyghurs who had been brought in for questioning, although it was unclear if the detentions were related to the attack.

“Are you talking about the people who had been captured? Until Saturday, 19 people were captured,” he said.

When asked further about the attack, the officer said that on Nov. 12, six Chinese from No. 8 village had been killed, although he was unable to provide the circumstances under which the deaths occurred.

“You had better ask these questions from our chief,” the police officer said, adding that Aral town had been quiet since the killings.

The chief of the Aral police station denied earlier reports that suggested as many as 11 people were killed there.

“No, in Aral there have been no killings since [Nov. 12]. But, maybe [the reports] are including the people who were killed in Yengerik town and Maralbeshi county.”

He confirmed that the Han Chinese killed in the attack had relocated to Xinjiang from inner China.

“It has been 20 years since they came to Xinjiang, but five since they moved to our town.”

The police chief said he was unable to comment on the earlier reference by his subordinate on the detention area of the Uyghurs.

“We transferred this case to the county, so you have to ask the details from the county,” he said.

The police chief of Yengerik town, where the other two deaths occurred, also denied earlier reports of a higher death toll.

“No it’s not that many. There were only two people who were killed in our village. One male and one female,” he said.

The chief sounded unsure of the date of the attack and was also unable to provide details of the incident.

“I cannot answer these questions. You need to ask my superiors from above,” he said.

‘An act of revenge’

A staff member from the Maralbeshi county government, who asked to remain anonymous, confirmed that a killing took place there in an incident similar to what had occurred in the two towns in Yengishahar county.

“I also heard about these incidents unofficially from the people. It seems that the government is hiding this information, not only from officials, but also from the police. Except for the police where the incident happened, even other police don’t know about this,” the staffer said.

“However, we have abundant news from the streets. From what we’ve heard, prior to the Kurban Eid [Muslim holiday], some Chinese migrants had been beheaded in Hoten prefecture and Poskam county of Kashgar.”

The staff member said the attacks were sparked by alleged "injustices" against Uyghurs by Han Chinese in Xinjiang.

“Two months ago in Kashgar [city], there was a big traffic incident and 14 Uyghurs were killed. But we heard that the Chinese driver had not been prosecuted and the families of the victims had not been compensated,” he said.

“We heard that the killing of six Chinese in Aral town was an act of revenge for this. But the recent spate of these incidents and the government’s controlling of this information shows that it could have been a form of organized political resistance.”

He added that the attacks were part of a larger response to ethnic relations in Kashgar, a region of Xinjiang in which Uyghurs have traditionally chafed against Chinese rule.

“It’s all about migration problems. Many Uyghurs have lost their farmland and most of the farmland is controlled by the Chinese immigrants. Whenever they hear about immigrants, the locals get irritated. This is the situation.”

World Uyghur Congress spokesman Dilshat Raxit noted that a rapid increase in Chinese immigration to the Xinjiang region since the Communists took power in 1949 has been seen as a threat to the native Uyghurs.

“The Chinese population in [Xinjiang] has reached 40 percent from 4 percent in 1949. It’s impossible that the speed of the increase wouldn’t concern and anger Uyghurs,” he said.

Dilshat Raxit said Uyghurs in Xinjiang tend to “see the migrants as a threat to their future” and as “more dangerous than the Chinese army in [Xinjiang].”

Millions of Uyghurs—a distinct, Turkic minority who are predominantly Muslim—populate Central Asia and the Xinjiang region.

Ethnic tensions between Uyghurs and majority Han Chinese settlers have simmered for years, and erupted in riots in July 2009 that left some 200 people dead, according to the Chinese government’s tally.