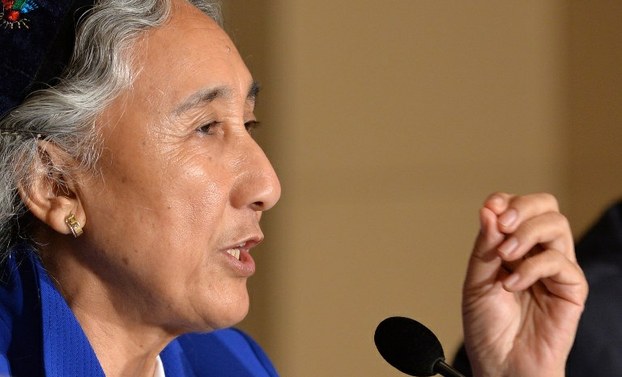 Following China's refusal in December to renew a work visa for French reporter Ursula Gauthier, who had been accused by Beijing of 'supporting terrorism' in her reporting from Xinjiang, exiled Uyghur leader Rebiya Kadeer, president of the Munich-based World Uyghur Congress, spoke to RFA's Uyghur Service about Gauthier's work and the real reasons for her expulsion from China.

RFA:  As the leader of a top exile Uyghur organization, what is your view of Beijing’s refusal to grant a new visa to French reporter Ursula Gauthier because of her on-the-ground reporting on the situation of Uyghurs in Xinjiang?

Kadeer:  Ursula Gauthier performed her duty as an independent journalist uncovering and reporting on the actual situation of Uyghurs inside China—facts that had been hidden by the authorities during a time of world outrage and renewed determination to fight international terrorism because of the recent tragic events in Paris. I offer my sincere gratitude to Madam Gauthier for her professional reporting and bravery. At the same time, I would like to congratulate the people of France for having such a daughter.

RFA:  Madam Gauthier has consistently refused to offer an apology to the Chinese government for her reporting, and has insisted that it is China’s unjust policies in Xinjiang that are the cause of violence in the region. What do you think has motivated her to be so strong in her stand?

Kadeer:  She has grown up in a free society that respects and values freedom, justice, and equality. And she has based her judgments on facts, not on the accounts offered by authorities. She has been aware of the tensions in the Uyghur region for many, many years, and has kept a close eye on the tragedies that the Uyghurs have endured under repressive Chinese policies.

RFA:  What about the Chinese claim that Madam Gauthier has “spread the seeds of hostility between ethnic groups in China”?

Kadeer:  Hostility between the ethnic groups in China—and especially between the Han Chinese and the Uyghurs—has had a long history, and significantly began right after China’s military occupation of the Uyghur homeland in 1949. That hostility was present long before Ursula ever wrote about it. The seeds of hostility have not been spread by Ursula’s pen, but by the Chinese government’s brutal suppression.

RFA:  The Chinese newspaper the Global Times has launched a public opinion poll asking whether Ursula’s permit to report from China should be extended. What do you think about this?

Kadeer:  First of all, I have to say that their intention is not sincere. But I will give them credit if they launch a poll asking the Chinese people if they would prefer continued one-party rule or a democratic, multiple-party system that offers real choice. I would also encourage the Global Times to extend its polling to ask the Uyghur people if they want to continue to live under Chinese rule. The Global Times knows very well that anyone who conducts such a poll will end up in a Chinese jail.

Kadeer consistently spoils otherwise legitimate complaints by overreaching on the facts. The fact is that the Nationalist government was in Xinjiang prior to 1949 and the underlying problems were basically the same as today. It is not as if there was some wonderful independent Uyghur homeland until the CPC came and messed it all up.