A Communist Party document sets out new curbs on Muslim Uyghurs after a spate of attacks.
2008-08-14
Tweet 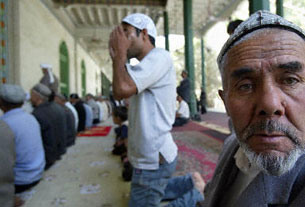 HONG KONG—After a series of violent attacks in the troubled northwestern region of Xinjiang, Chinese authorities have called for tighter controls over mosques and religious activities around the Silk Road city of Kashgar.

A directive issued Aug. 5 by Party authorities in Yengisher [in Chinese, Shule] county and obtained by Radio Free Asia’s Uyghur service sets out to test the loyalty of Muslim Uyghur officials in charge of religious activities.

“If, in the...management of religious affairs, ethnic minority officials merely stick to the form of the regulations, going through the motions, but do not educate, direct, and investigate the activities going on in public places of worship...the officials responsible for maintaining contact with the mosque concerned will be subjected to punishment in a case which will be regarded as a conspiracy,” the directive said. 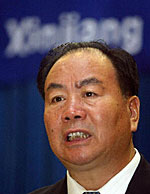 The Kashgar directive warns that Uyghur officials who fail to police their fellow Muslims in the manner proper to a Communist Party official will be subject to official sanctions, including warnings, stripping of Party posts, and expulsion from the Party.

Uyghur officials are warned against taking part in religious activities, falling into religious “temptation,” and taking sides with their local mosque in an argument.

“This will be considered a failure to carry out their duties and as a conspiracy, to be punished with a warning to the officials responsible, or a serious warning, depending on the case,” the document said.

“Such officials will also be stripped of any Party posts they hold, and either allowed to remain members only under observation, or expelled from the Party altogether.”

China says extremists in Xinjiang are bent on using violent means to re-establish a separate state of East Turkestan, the name of a short-lived Uyghur state in the 1930s and 40s. They say Uyghur extremists have plotted terrorist strikes during the Beijing Olympics.

Exiled Uyghurs and overseas rights groups counter that Beijing’s “war on terror” is a pretext for tighter controls on the region, which is strategically important and rich in oil.

The Party document also warns against underground publications or unauthorized religious scriptures, including any interpretation of the Quran that deviates from Beijing-approved guidelines.

Officials are warned against permitting religious groups to “use the platform of sermons and interpretations to propagate views which harm ethnic unity, or talk of religious extremism or ‘Jihad,’ or of pan-Islamism or pan-Turkism, or the dissemination of slander, or the defamation of government officials resulting in negative consequences."

They are also reminded to maintain tight controls over building work on mosques.

It cautions “any officials overseeing a mosque which carries out unauthorized construction work or that builds in an overly conspicuous or grand manner.”

Officials, it says, “who turn a blind eye to what goes on, and who do nothing to stop it, and who neglect to report it, will have lost political edge proper to a Party official, and could cause negative consequences and damage to society.”

China has issued repeated calls for ethnic unity amid the recent attacks, which it said were the work of Uyghur separatists seeking to use the Olympic Games in Beijing as a platform to amplify their political message.

A spokesman for the Kashgar municipal government said the deadly knife attack Aug. 12 in Yengisher [Shule] county differed from attacks the previous week in Kucha city, in which suicide bombers killed one police officer and injured a bystander.

“The police are still investigating this incident,” the propaganda bureau official said, amid rumors that the Yengisher attack was the work of individuals with a grievance rather than political aims.

Residents said many of the minor roads in the county were still sealed off. “You can’t get through this way, because there are checkpoints on the road. You have to go the other way round,” one resident said.

A local Han Chinese resident said he didn’t fear for his personal safety because the attacks had taken aim at official targets.

“This is an ethnic minority region,” he said. “People here feel oppressed. If you look around you will see that all the people in charge here are Han Chinese. There isn’t a single Uyghur. That doesn’t get talked about much."

Another Han Chinese employee in the tourist industry agreed. “We can’t talk about this stuff,” he said. “It’s secret. We just get on and do our jobs. But everyone here feels bad.”

The Communist Party issued similar directives in the wake of unrest among Tibetans earlier this year, which began with peaceful protests in the Tibetan capital, erupting into riots targeting Han Chinese businesses.

Many ethnic Tibetan cadres in areas of western China where tensions between Tibetan nomads and local government are high have been replaced with ethnic Han Chinese officials, sources say.