A legal visitor in Cambodia was apparently swept up in a mass deportation to China.
2009-12-23
Tweet 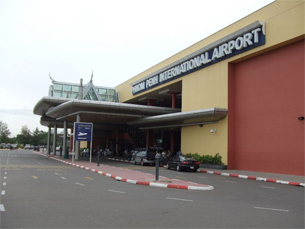 WASHINGTON—One of 20 ethnic Uyghur asylum-seekers deported from Cambodia to China as illegal migrants entered the country legally and on the advice of U.N. refugee officials, Radio Free Asia (RFA) has learned.

Tuniyaz, born in Aksu and a graduate of Shanghai Jiaotong University, spoke in 2007 with RFA’s Uyghur service about the shooting of a Uyghur man by Chinese security forces in Urumqi, capital of the Xinjiang Uyghur Autonomous Region (XUAR).

Tuniyaz entered Thailand in early 2009 and sought asylum through the Bangkok office of the U.N. High Commissioner for Refugees (UNHCR), where a staff member suggested he might expedite the process by approaching the UNHCR office in the Cambodian capital, Phnom Penh, instead, he said in an earlier interview.

He obtained a visa through the Cambodian embassy in Bangkok and entered Cambodia legally, he said. Tuniyaz was in Cambodia legally when deadly ethnic rioting erupted in Urumqi on July 5 this year.

The 20 Uyghur Muslims deported Saturday under intense Chinese pressure had fled to Cambodia in search of asylum after witnessing and documenting violent ethnic riots in the restive western Chinese region of Xinjiang this summer that left nearly 200 dead.

They had warned the UNHCR that they feared long jail terms or even the death penalty if they were sent back to China, according to statements obtained by The Associated Press. 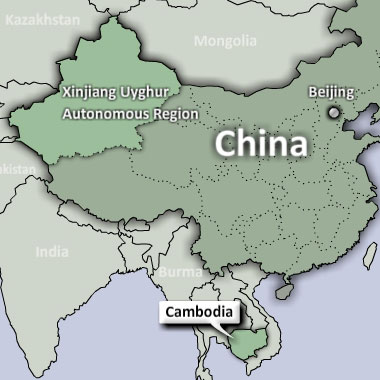 A map showing China's Xinjiang Uyghur Autonomous Region and Cambodia. Photo: RFA
Tuniyaz had been translating for and staying with the group of 21 Uyghurs in Phnom Penh—two are said to have fled—when the group was detained.

Cambodia said it expelled the Uyghurs because they had illegally entered the country. It has since been sharply criticized by Washington, which said the deportations would harm bilateral ties with the United States, though they may have strengthened relations with Beijing.

On Monday, China signed off on more than U.S. $1.2 billion in aid to Cambodia during a visit there by Vice President Xi Jinping. The assistance, including 14 agreements for grants and loans, ranges from help in building roads to repairing Buddhist temples.

The European Union said Monday it was "deeply concerned" about Cambodia's decision to return the group of Uyghurs to China and urged Beijing to respect the rights of the returnees.

“This is a blatant violation of Cambodia’s obligations under the principle of non-refoulement as stipulated in Article 3 of the U.N. Convention Against Torture,” Nowak said in a statement.

Nowak said that he had reports of “severe torture” in Xinjiang following the unrest and that recent executions there violated “the most basic fair trial guarantees.”

“I am calling on the Chinese authorities to treat the 20 persons humanely upon return in accordance with international standards, to grant access to them in case they are detained and to afford them due process guarantees, if charged with criminal offenses”, he added.

WHEN THE COMMUNIST WORKED HARD TO TAKING CARE OF THE PEOPLE LIEVES, NO ONE TRIED TO HELP THE POOR COUNTRY LIKE US, BUT COME TO DESTROY US TOO. BUT WHEN WE GOT OUR OWN RULE TO TAKING CARE OF OUR OWN PEOPLE LIVING SOME DAY IN OUR REGIME. ONLY TWO COUNTRIES LIKE CAMBODIA AND LAOS NOW THEY DON'T KNOW WHERE TO GO? STAY WITH COMMUNIST OR GET OUT OF COMMUNIST. WE ARE A NICE GUYS WE WILL HELP THEM ALL THE TIMES WHEN THEY ARE NEEDED US.

it seems Cambodia fall in love with Chinese money. They would sell anything they have for money. no worry about their dignity, money first. Stupid Communist Cambodia

let talk straight to this case. whaever camodian government had done, because of grand father ho chi minh told to hun xen to do.when north v.c told cambodian government to deport those people back they just followed the boss's commanding. we will sorry to those people. wrong times and wrong place comming. mind about red chines big money too.

Dear Mr. Tran, please be informed that we do not edit comments posted to the RFA Web site. We will not publish comments if they are deemed unfit according to RFA's Terms of Use, but otherwise comments are published the way they appear when they are submitted by the reader.

Mind you all, it were not the Vietnamese or Cambodian afraid of the Chinese, and also the US and EU. For example ExxonMobil of the US was not daring fight back on a contract they have with Vietnam oil and gas explorations. Some of these Overseas Vietnamese pretended they can still have kiss buts on the US and EU. The Overseas Nguy Vietnamese have always considered as parasites. Bill Clinton said ‘a bunch of Vietnamese coy boys love to play guns’.

RFA altered my writing, please NOT!