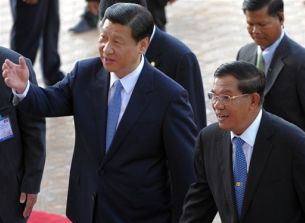 HONG KONG—China is defending its deportation of 20 ethnic minority Uyghurs who had fled to Cambodia in the wake of deadly ethnic rioting, as the United States voices “deep concern” over the move.

They were deported back to China on Saturday despite international protests and fears that they could face trial, torture, and execution in China.

“In line with immigration law, Cambodia has in recent days deported 20 Chinese citizens who illegally entered their country,” Chinese Foreign Ministry spokeswoman Jiang Yu said in a faxed statement. “The Chinese side received the above-mentioned people according to usual practice.”

Jiang didn’t indicate where the Uyghurs were or whether they had been charged with any crime upon their return to China.

The U.S. State Department said Sunday it was “deeply disturbed” by the move, which may have violated Cambodia’s international obligations to asylum-seekers.

Washington “is deeply concerned about the welfare of these individuals, who had sought protection under international law," State Department spokesman Gordon Duguid said.

“The United States strongly opposed Cambodia’s involuntary return of these asylum seekers before their claims have been heard. This incident will affect Cambodia’s relationship with the U.S. and its international standing,” Duguid said in a statement.

He urged Beijing “to uphold international norms and to ensure transparency, due process and proper treatment of persons in its territory.”

China has handed down at least 17 death sentences over the rioting. Police have meanwhile detained more than 700 people in connection with the unrest, according to earlier state news reports.

The United States, the United Nations, and human rights groups had urged Cambodia to stop the deportation. And in statements given to the U.N. High Commissioner for Refugees (UNHCR) and seen by the Associated Press, several of the Uyghur asylum-seekers voiced fears they would be imprisoned or executed upon their return.

The Chinese government has detained hundreds of Uyghurs, and at least 43 Uyghur men have disappeared in the wake of ethnic violence that erupted in Urumqi on July 5, according to Human Rights Watch, which says the actual number of disappearances is likely far higher.

Uyghurs, a distinct and mostly Muslim ethnic group, have long complained of religious, political, and cultural oppression by Chinese authorities, and tensions have simmered in the Xinjiang region for years.

Rebiya Kadeer, president of the World Uyghur Congress and the Uyghur American Association, said in a commentary Monday that the deportations signify “China’s increasing ability to resist international pressure regarding its human-rights violations.”

“Governments of countries neighboring China are reluctant to take any action that would displease Chinese authorities, leaving Uyghurs nowhere to flee,” Kadeer wrote in The Wall Street Journal.

Kadeer, a former political prisoner in China, called on governments “committed to the preservation of human rights” to press Beijing over the case.

“During my time in a Chinese prison, my jailers often told me the world did not care about me or the Uyghurs’ struggle for freedom, but my treatment did improve when officials from the U.S. and other democratic countries campaigned for my release,” she wrote.

“If there is to be any hope for the safety and well-being of these Uyghur asylum-seekers, it is vital that world powers continue to press China regarding their welfare.”

Why did not they get the US Visa?

Very regrettable, the world is too late to help those unfortunate forcibly sending-back people. It is high time for Hun Sen pawn regime to review their policy on nearly three millions of illegal Vietnamese migrants in Cambodia. Everyday, Hanoi communist force sending back lots of Cambodian people on Vietnamese-occupied Khmer Krom land. Why Hunsen and his cabinets seem to have no brain to react or take any proper action against Vietnam only they enjoy perpetrating grave offences on their own Khmer and Khmer Krom people. Hunsen wants to be Hero under Chinese and Hanoi's feet. That's very shameful of Hunsen as Khmer but behaves like toy.

The face of criminal Hunsen looks very greedy when on the reception ceremony to receive China Vice-president, the most violator on Human rights and racial discrimination towards minority tribe in China. Down with Communists and dictators.

In the case of Uighurs, Cambodia is in no position to resist China's request. Even if China's neighboring countries, the closer places where these people can take refuge, do not dare to harbor them. Super powers like those in the UN security council should work hard to make China improve its human rights records. Cambodians, including Premier Hun Sen, have learned well from the past when he sought refuge in Vietnam to escape the Khmer Rouge to which he was formerly part of. Cambodia cannot do much to help these Uighurs. The US and other big countries can still have time to protest and ensure the safety of these people.

Why is it that China always blackmails countries like Cambodia and Vietnam to do whatever China wants??? Hunsen and Nguyen Tan Dung have received millions of dollars from China and that is why they are Chinese slavers. We need to condemn these two ministers and they should be punished.