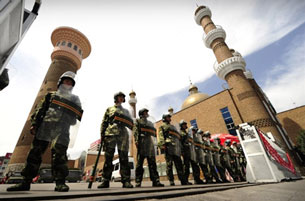 A female Uyghur student in northwestern China was sentenced to death with a two-year suspension following a trial last April on charges of participating in ethnic riots that left hundreds dead, according to a classmate.

Pezilet Ekber became the second Uyghur woman to receive the death penalty in connection to the unrest. Another woman was executed by Chinese authorities earlier this year.

“Nobody knows what exactly led to Pezilet Ekber receiving such a heavy punishment, other than her ‘involvement in violence,’ because the trial was secret and her parents were only just informed of the decision,” her classmate, who asked to remain anonymous, wrote in a letter.

“After the trial, her parents were just given the judgment, and were warned to keep silent and to refrain from telling the content of judgment to anyone,” the letter said.

Pezilet Ekber, 19, had been enrolled in Russian language classes at Xinjiang University in the Xinjiang Uyghur Autonomous Region (XUAR) capital of Urumqi just before the violence erupted, her classmate wrote.

But she had temporarily left the school because of her family’s financial difficulties and was working for a Han Chinese-owned business in the city’s Grand Bazaar as a translator and saleswoman at the time of the riots, the letter said.

Urumqi’s Grand Bazaar was one of the locations central to Uyghur demonstrations and violence during the July 5, 2009 riots, which left nearly 200 people dead, according to official Chinese estimates.

In the letter, Pezilet Ekber’s classmate wrote that the two had met on July 4 last year, and that her friend had no plans to attend the demonstration the following day.

“Her workplace was at the center of the event so she was probably unable to keep herself away when she saw the demonstrators and witnessed the tragic event of the demonstrators being shot by police,” the letter said.

“She usually always took a careful approach to such subjects related to the ethnic problem, even if it was a class discussion, because of her family background—being the granddaughter of a former independence fighter.”

Pezilet Ekber’s father, Ekber, 45, was a former state security officer in Qorghas county, but was forced out of his job due to his family background when ethnic tension began to build in the XUAR in the late 1990s.

Her grandfather had served in Ili prefecture's Gulja city as a member of the East Turkestan Liberation Army shortly after its founding in 1944, seeking independence from China.

A friend of Mr. Ekber, reached by telephone, said he had traveled to Urumqi on April 16 to visit his daughter in detention, but police ordered him to leave the city within a day of his arrival.

“He left without seeing his daughter. It happened just a few days before Pezilet’s trial,” the friend said.

“After that, I never saw him again—I guess it was in order keep his daughter’s life safe. Now he has isolated himself from the public to avoid leaking ‘state secrets.’ I don’t know whether or not he was able to visit his daughter after the trial.”

Pezilet Ekber’s boss at the shop in the Grand Bazar, a man surnamed Zhang, briefly answered questions about her detention and subsequent trial.

When asked if Pezilet Ekber was available to speak, Zhang said she hadn’t worked at the store since September.

When asked when she would return to work, he answered, “My guess is that will never happen,” but hung up the phone before responding to questions about why she was unable to return.

Employees who answered the phone at the Urumqi Intermediate Court, which handed down the punishment to Pezilet Ekber, and the Ghalibiyet Police Station, which ordered her father to leave Urumqi in April, both refused to speak with reporters.

Ilshat Hassan, U.S.-based spokesman for the World Uyghur Congress, said Pezilet Ekber may have been singled out by the court due to her family history.

“Usually family background is the most considered factor at the time of a decision, especially in political and ethnic cases tried by Chinese courts,” Hassan said.

“I think Pezilet Ekber’s family background was one of the factors which influenced the decision.”

Pezilet Ekber is the second woman known to receive the death penalty in the aftermath of the Urumqi unrest, according to information made public by Chinese authorities.

In January, Hayrinsa Sawut, 20, was executed for committing murder during the riots.

A third woman, Gulmire Imin, received life in prison for her role as an “illegal organizer” during the 2009 demonstrations.

Reported and translated by Shohret Hoshur for RFA’s Uyghur service. Written in English by Joshua Lipes.