After the worst violence there in a decade, officials in China's northwesternmost region tighten curbs on the observance of Ramadan.
2008-09-06
Tweet 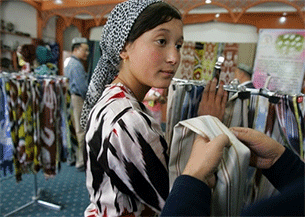 Scarves are sold at a silk factory in Hotan, in China's far west Xinjiang Uyghur Autonomous Region in a file photo.
AFP

HONG KONG—China is stepping up restrictions on its Muslim Uyghur population during the fasting month of Ramadan, following a string of violent attacks in its northwestern region of Xinjiang.

Women are being forced to uncover their faces in public by police, while restrictions on teaching Islam to Uyghur children are being intensified, police said.

“We are...checking the identities of those who have beards or mustaches, and women who cover their faces,” an officer who answered the phone at the Charbagh village police station, in Lop county, Hotan prefecture.

“We uncover the faces of veiled women by force if necessary,” he said. “We also arrest anyone teaching religion to children illegally,” he said, adding that police were also helping to enforce a ban on Muslim restaurant closures in Ramadan.

Restaurants run by Muslims are forbidden to close in daytime during the fasting month, as is the custom in other Islamic regions of the world, according to official statements on government Web sites in Xinjiang.

"This is government policy. It covers only Uyghur restaurants."

In Atush city, in the far west of the remote Tarim Basin, “It was decided after general discussion to produce a document titled ‘Promise to remain open for Atush city’s Muslim restaurants during the Ramadan period’,” according to a statement issued by the municipal commerce and industry bureau.

Officials have been dispatched to count all the restaurants run by Muslims and to “educate” their owners so that they sign the agreement of their own accord, it said. Officials in other parts of the region cited similar measures.

“The new instructions target only Uyghur restaurants,” an official from the Lop county taxation bureau in Hotan prefecture in the far south of Xinjiang said. “We don’t issue such orders for [Han] Chinese restaurants.”

“This is government policy. It covers only Uyghur restaurants. It is only for one month—I mean September. The order came from the prefectural level of government in Hotan,” he said. “In September, all the restaurants must be kept open.”

'We will be punished'

During Ramadan, Muslims who are able should take no food, water, or cigarettes during daylight hours. Restaurants in Muslim countries close during the day, re-opening to break the fast after sunset.

A Uyghur restaurant owner in Hotan’s Keriye county confirmed the policy: “We must keep our restaurant open during Ramadan,” he said. “If we don’t follow government’s orders, we will be punished.”

“The order says that if we close our restaurant during Ramadan, the government will close the restaurant for between six and 12 months as a punishment, and that also we will have to pay a fine,” he added.

“Leading cadres of townships will be severely punished or investigated in accordance with law if the ban on fasting is violated,” the Germany-based World Uyghur Congress said in a statement signed by spokesman Dilxat Raxit.

Special groups have been set up in schools to educate Uyghur teachers and students not to fast, and to monitor their activities on pain of expulsion from school, Raxit said.

Similar restrictions are in force in Toqsu [in Chinese, Xinhe) and Shaya counties, near Kucha, where up to 10 alleged Muslim attackers were reportedly killed after assaulting a local police station Aug. 10.

China is home to up to 11 million Uyghurs, a Turkic-speaking minority group that formed two short-lived East Turkestan republics in the 1930s and 40s during the Chinese civil war and the Japanese invasion.