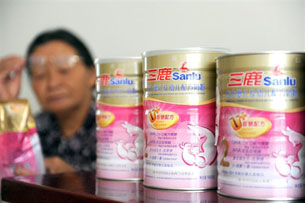 "Many adults are also being examined in hospitals in the Lhasa area," an official of the Tibet Autonomous Region (TAR) based in Lhasa said.

"They have suspected kidney problems as a result of their consumption of sweet tea. Most tea shops in Lhasa use powdered milk made by Sanlu," he said, referring to the New Zealand-invested dairy joint venture at the heart of the scandal, in which the industrial chemical melamine has been found in several brands of baby milk.

"Many milk powder products came from small private production centers in Qinghai and Gansu, and those private firms are also being investigated," the official said.

He said around 100 children had suspected kidney problems in the Tibetan regions of Shigatse, Kham, Lhoka, and Nyingtri.

There are many children coming for medical check-ups. I even saw them lining up right into the courtyard."

"Every day the number is on the increase and about 30 of them have been diagnosed as serious," the official added. "Those were affected some time back. Most of them are between four and six years old."

The ages of the children suggest that quality problems with milk powder may predate the revelations at Sanlu and other companies, which have prompted the removal of several brands of milk from shelves across China and vows of class-action lawsuits from angry and bereaved parents nationwide.

Health authorities in the Tibetan capital said earlier this week that 45 babies there had been confirmed with kidney problems, a dozen of whom were in hospital.

"We are examining children affected by Sanlu baby milk powder," a Tibetan doctor in the Lhasa municipal hospital said. "We started examining them from Sept. 18. So far, we have examined about 1,000 children, and 12 of them were affected—stones were found in their kidneys."

She also said the children affected by Sanlu milk powder were aged four to five years old. "Examinations are being carried out from 9 a.m. to 6 p.m. Most of those who came to hospital were Tibetans. There are Tibetans and also Chinese who were affected by the tainted milk," the doctor said.

"Reduced urine and blood in their urine are the common symptoms," she added.

A Tibetan staff member on the children's ward at the Lhasa People's Hospital described scenes of worried parents queuing with their children into the courtyard.

"The People's Hospital is also examining babies with suspected problems caused by tainted milk," she said.

"There are many children coming for medical check-ups. I even saw them lining up right into the courtyard," she added.

Lhasa father Lona Nyima said his son Tashi Nyima was one of them.

"There was blood found in his urine in April. Then it was confirmed in July that he has kidney problems," said Lona Nyima, whose son used Sanlu powdered milk last year.

Public outrage in China is mounting over the milk powder crisis that has sickened more than 50,000 babies after they consumed the milk products laced with melamine, which gives the appearance of higher protein content.

The head of China's product quality regulator has resigned over the scandal, in which top executives of Sanlu Group and key local officials are accused of trying to cover up safety problems after the first complaints were reported in March.

Doubts have now been cast on a series of other milk products, with Mengniu, Scient, Yili, and Guangming brands also now removed from shelves.

This is the latest in a series of product safety alerts in China in recent years. Melamine first turned up last year in Chinese pet food exported to the United States, where many cats and dogs developed acute kidney failure and died.