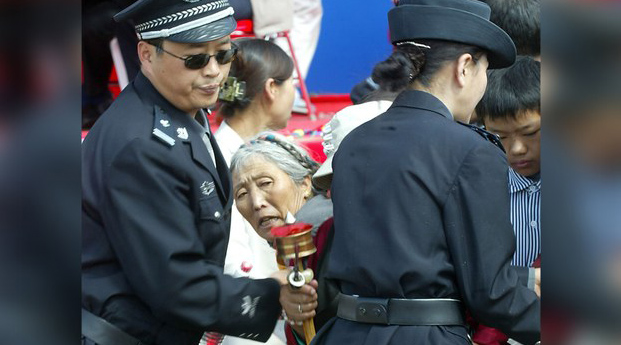 Chinese police block Tibetan worshipers at a religious festival in Lhasa in a file photo.
AFP

Tibet’s India-based exile government hit back this week at a call by China’s President Xi Jinping to Sinicize the Tibetan people's Buddhist religion, describing the move as an attempt by China’s ruling Communist Party to destroy Tibet’s unique national identity.

“Tibetan Buddhism should be guided in adapting to [China’s] socialist society and should be developed in the Chinese context,” President Xi said on Aug. 29 at the 7th Central Symposium on Tibet held in Beijing.

Efforts to make Tibet’s centuries-old faith comply with China’s culture and political goals are misguided and unrealistic, though, Lobsang Sangay—political leader, or Sikyong, of Tibet’s exile Central Tibetan Administration—said in a response issued by the CTA this week.

“[The] Sinicization of Tibetan Buddhism is never going to work,” Sangay said. “The last 60 years of Chinese rule in Tibet is a testament to that fact.”

“The root cause of instability in Tibet is not the Tibetan people’s faith, but the repressive and failed policies of the Chinese government. The continuation of these hard-line policies and repression is only going to make matters worse,” Sangay said.

Chinese police and surveillance teams now regularly monitor life in Tibetan monasteries for signs of opposition to China’s rule, source in the region say. Meanwhile, authorities interfere with Tibet’s traditional recognition of senior Buddhist monks and other religious leaders in order to install politically compliant figures of their own choosing.

“Yet the determination of the Tibetan people inside Tibet is still strong, and [they remain] faithfully devoted to His Holiness the Dalai Lama,” Sangay said.

Regarded by Chinese leaders as a separatist, the present Dalai Lama fled Tibet into exile in India in the midst of a failed 1959 Tibetan national uprising against rule by China, which marched into the formerly independent Himalayan country in 1950.

China’s continuing attacks on the Dalai Lama meanwhile “show that Tibet is very important to the Chinese government, and also reflect Chinese officials’ fear of losing control,” Ngodup Tsering—the Dalai Lama’s representative in the Washington-D.C. based Office of Tibet—told RFA’s Tibetan Service in an interview this week.

It has been more than a decade since the Dalai Lama, Tibet’s traditional ruler, handed his political authority over to Tibetan exile political leaders now chosen by popular vote, Tsering said. “But China’s continued denunciations of His Holiness the Dalai Lama show that they are still deeply afraid.”

President Xi’s speech signals a “doubling down” of China’s current hard-line and repressive policy in Tibet, said Pema Jungney, speaker of Tibet’s India-based exile parliament, adding, “I can’t interpret it any other way.”

“They are determined to wipe Tibet’s history from the face of the earth.”

China is now establishing Communist Party structures in all areas of Tibet “to strengthen their command, policies, and power, thus suppressing all the freedoms of Tibetans in the spheres of faith and belief, politics, the economy, and culture,” Boston-based Tibet analyst and former assistant director of the Tibetan Centre for Human Rights and Democracy Jampel Monlam said, also speaking to RFA.

“If these policies of China’s continue much longer, I worry about what will happen to Tibet,” Monlam said.