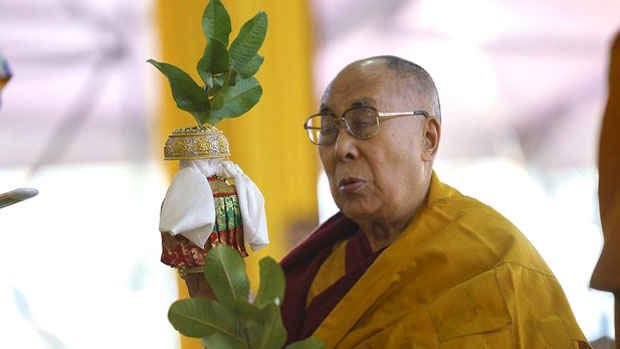 Tightened controls by Chinese authorities over passports issued to Tibetans have blocked pilgrims traveling to India and Nepal from Tibetan areas of China, greatly reducing the numbers attending teachings given this year by exiled spiritual leader the Dalai Lama, sources say.

Teachings given by the Dalai Lama in Bodhgaya, India, drew thousands of Tibetans living in China last year, but on returning to China many had their passports taken away and destroyed by authorities seeking to limit Tibetans’ contact with outside “separatist” forces.

This year, "not more than a hundred" came from Beijing-ruled Tibetan areas to attend the Dalai Lama’s teachings, which began on Dec. 17 and will run through Dec. 31, according to a report by RFA’s Tibetan Service.

Travel restrictions imposed on Tibetans now include refusals to grant new passports and the confiscation of many passports already issued, a Tibetan living in northwestern China’s Qinghai province said.

“For Tibetans, winter is a good time for going on pilgrimage from Tibet to [Buddhist] holy sites in India, Nepal, and Bhutan,” RFA’s source said, speaking on condition of anonymity. “But compared with previous years, the numbers of pilgrims this year has gone down.”

Though some Tibetans living in Qinghai’s Tsolho (in Chinese, Hainan) prefecture already have passports, many of these have been revoked and taken away, RFA’s source said.

“Other Tibetans who bought plane tickets and came to [Sichuan’s] Chengdu airport are being singled out and stopped at airport checkpoints.”

“And if Chinese officials examine the passports and find canceled names and numbers, they say that the passport holders cannot cross international borders, and they send them home,” he said.

Tibetan farmers and nomads especially face many obstacles in obtaining travel documents from Chinese officials, and this has stopped many would-be pilgrims from traveling outside the country, a second Tibetan source told RFA, speaking in Nepal.

“I myself was able to come here only once this year,” the source said, also speaking on condition his name not be used.

“But we have to be very careful what we say in public, lest we get into trouble when we go back to Tibet,” he said.

Travel restrictions on Tibetans who want to visit India is arbitrary & illegal. This is to control their right to see the Dalai Lama for religious teachings. It's a denial of freedom of religion but standard procedure for the Chinese Govt who doesn't respect basic human rights.

I've heard that Han Chinese who live in Tibetan areas had their passports confiscated as well. Some have speculated that the ban on travel is not absolute, rather, anyone wanting to travel abroad needs to apply to have their passport returned and explain their reason for travel.