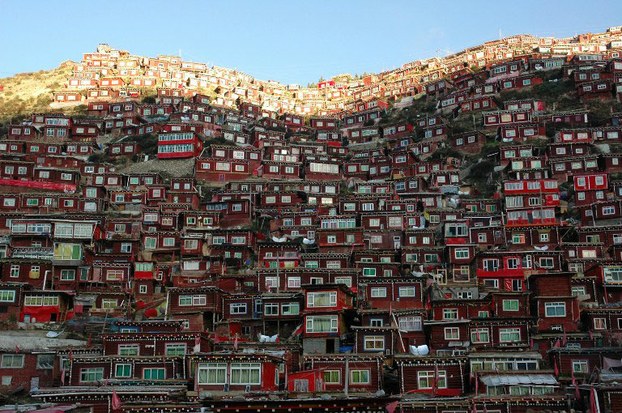 Monks' and nuns' houses are shown at Larung Gar in Sichuan in an undated photo.

Hundreds of Han Chinese and Western students living at Sichuan’s Larung Gar Buddhist Academy have been quietly ordered to leave as Chinese authorities continue the forced, and better publicized, removal of larger numbers of Tibetan monks and nuns, sources say.

Several hundred Han Chinese, many of them living at Larung Gar as lay practitioners but some also monastically ordained, have already been evicted from the center, a local source told RFA’s Tibetan Service.

“Many of them had lived in Larung Gar for many years, while others joined later in order to study and practice,” RFA’s source said, speaking on condition of anonymity.

“They came from different parts of China,” the source said.

“There were also many students from Western countries, including the United States and countries in Europe, who were studying at the center, and they too were forced to leave without any publicity,” he said.

Tibetan monks and nuns have so far made up the largest number of Larung Gar residents forced to leave, though, RFA’s source said.

“The brunt of the hardship was faced by the monks and nuns who were sent back to their home counties in the Tibet Autonomous Region,” the source said.

“They were not allowed to go straight back to their family homes but first had to undergo a month of patriotic reeducation programs, after which they were allowed to return.”

Following the eviction last week of hundreds of monks and nuns who had come to Larung Gar from counties in Golog (in Chinese, Guoluo) in neighboring Qinghai, another large group of nuns was sent away by bus on Dec. 28, the source said.

“At that time, many other nuns who had gathered at the station cried out in pain and distress at the departure of their friends.”

Chinese work crews are still carrying out the destruction of monks’ and nuns’ houses at Larung Gar, he said.

Many thousands of Tibetans and Han Chinese once studied at Serthar (Seda) county’s sprawling Larung Gar complex, which was founded in 1980 by the late religious teacher Khenpo Jigme Phuntsok and is one of the world’s largest and most important centers for the study of Tibetan Buddhism.

Many have already been expelled from the makeshift dwellings that once lined the hillsides around Larung Gar as authorities seek to reduce the center’s population by about half to a maximum level of 5,000 by next year, sources told RFA in earlier reports.