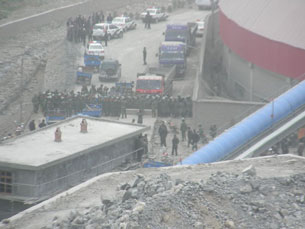 In a photo submitted by a local resident, police confront Tibetans on a road in Yarshul village, May 15, 2010.
Local resident

KATHMANDU—Fifteen Tibetans are injured, one seriously, and four are detained after Chinese security forces fired on them as they refurbished a road claimed by a Chinese-owned cement factory in northwestern Gansu province, witnesses said.

"One Tibetan was hit in the chest and is said to be in serious condition. His injury could be fatal. All those injured have been taken to hospital," the witness said. What security forces were firing—rubber bullets, tear-gas, or live ammunition—wasn't immediately clear.

On May 15, Tibetans from Yarshul village in the Hortsang subdistrict of Labrang [in Chinese, Xiahe] were gathering to refurbish a road that had been taken over by the Xiahe Amdo Cement Co. Ltd., Tibetan witnesses said.

At some point, company officials, police, and cadres arrived, and the county deputy governor told the Tibetans to leave within 15 minutes or face the threat of violence—but as the group was leaving, security forces arrived and fired projectiles at them, injuring 15 people, witnesses said.

A local teacher set the number of Tibetans in the crowd at 200 to 300 people, who briefly blocked the road they were repairing “until the factory called in many people including police who fired a lot of tear-gas shots. Seven or eight villagers were wounded and several arrested.”

A police officer in the Xiahe Public Security Bureau confirmed that police had been dispatched to the factory. “I don’t know the details because I wasn’t on the scene then. But yes, we dispatched officers there,” she said.

A Xiahe Amdo Cement Co. employee confirmed that a clash had occurred but declined to give details. “There is no more turmoil today, and the trouble was on the 15th [of May] only. The villagers were provocative, without justification.” 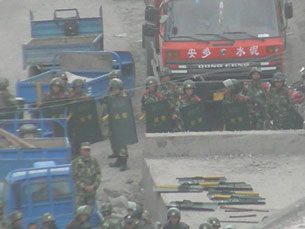 In a photo submitted by a local resident, police confront Tibetans on a road in Yarshul village, May 15, 2010. Credit: Local resident Local resident
Another witness identified a group of Tibetans who had been taken into custody after the incident.

"Four were detained. They are named Soekho, Jalo, Gonpo Lhundup, and Gonpo Thar. Chinese security forces arrived at the site and fired on the Tibetans," he said. Another source said that the Tibetan named Soekho escaped, and that another man, Tselo, was taken into custody.

The detained men are being held in the Xiahe Police Detention Center, according to a Tibetan from the area who now lives in southern India. Relatives have been allowed to bring them food and bedding, he said.

"There are posters up seeking information about Soekho's whereabouts," one man said, referring to the Tibetan who escaped detention.

The cement factory, built in 1985, has irritated relations between Han Chinese factory owners and officials on one side, and Tibetan natives on the other, according to local sources.

Tibetans also accuse the local authorities of failing to address their concerns about the factory, which employs hundreds of workers, uses a fleet of trucks that locals say blocks roads and snarls traffic, and discharges dust, smoke, and gases that pollute the environment. 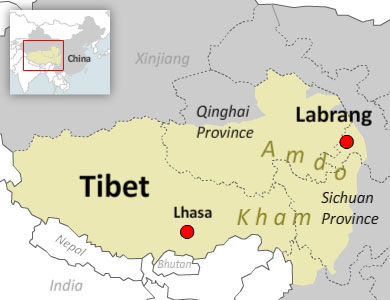 Photo: RFA
“The pollution is very serious. We cannot say anything bad about the cement factory, because if we do, we will be detained. Last year there was a clash as well, wounding many men and women,” the teacher said.


One major point of contention, a local Tibetan said, was the damage done to a white pagoda—cherished by Tibetan Buddhists—by factory trucks carrying excavated stones. The factory, he said, was expanding and digging out tunnels.

“Now the heavily loaded trucks go up and down onto the mountain, and the white pagoda is just beside the road,” the man said. “We villagers agree that the factory should be operated well. The pagoda should be protected well, because it relates to our religion.”

On May 15, the man said, “We went to the gate of the factory to protest, but they didn’t pay any attention to us. On the contrary, they called out around 300 police and thugs wielding rubber-wrapped batons. Police fired many tear gas shots and attacked us using their tear-gas rifle butts.”

“The pollution is getting worse and worse—in summer, many local women have to work in the field wearing masks over their noses and mouths. Even wheat in the field is covered with ash, looking grey rather than green.”

Tibetans have benefited very little from the factory, he said. “The benefit has been shared only by cadres. We’ve received very little. We villagers are very angry. Water in some villages has dried up," so that farming and livestock have suffered.

“Villagers have petitioned for years, to the county and other government offices, but to no resolution. They either pressure or detain the petitioners and lock them up in unknown places.”

It also said villagers had reported the issue to the relevant state environmental protection department and to central government media. How many people signed the petition and to whom they sent it were unclear as of Tuesday.

Mining has also recently led to confrontations in Tibetan-populated areas.

In Markham [in Chinese, Mangkang] county, in the Tibet Autonomous Region (TAR), Tibetan villagers staged anti-mine protests earlier this month in which at least five Tibetans were injured.

Tibetans in Markham regard nearby mountains as sacred, and Markham last year saw demonstrations against mining at a mountain known as Ser Ngul Lo ["Year of Gold and Silver," in Tibetan].

Tibetans have historically worshiped at the site, conducting rituals there in the event of drought, residents say.