A young Tibetan dies more than a month after self-immolating to protest Chinese rule.
2012-07-31
Tweet 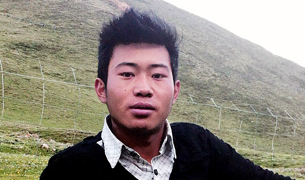 A Tibetan self-immolator has died of his burns in a Chinese hospital, more than a month after setting himself ablaze to protest Chinese rule in Tibetan areas, a source close to the man’s family told RFA on Tuesday.

Ngawang Norphel, 22, was one of two young Tibetans who self-immolated on June 20 in Dzatoe township, Tridu county, in the Yulshul (in Chinese, Yushu) prefecture of China’s Qinghai province.

His companion, Tenzin Khedup, 24, died at the scene.

“[Ngawang Norphel’s] last rites were conducted this morning,” the source said on Tuesday, adding that Norphel died in a hospital in Qinghai’s provincial capital Xining on Monday.

Norphel’s remains would be cremated sometime in the next day or two, the source said.

Though Norphel had been living in Yulshul at the time of his protest, he came originally from the Nyenpo subdivision of Nyalam county of Shigatse prefecture in southwestern Tibet, RFA’s source said.

He had been living in Yulshul since 2008, the source said.

Norphel’s father, Lhakpa, visiting his son in the hospital after learning he was there, was warned by Chinese police not to discuss his son’s protest or condition with news media, saying that if he did so he would have to “pay a price,” the source said.

At the end of their visit, Norphel’s father kissed his son, touched his son’s forehead to his own, and left weeping, he added.

Forty-four Tibetans have set themselves ablaze so far in a challenge to Chinese rule since the current wave of burnings began in February 2009, with nearly all of the fiery protests taking place in Tibetan-populated provinces in western China.

The first self-immolation protest in the Tibetan capital Lhasa was reported in May , when two young Tibetan men set themselves on fire in a central square of the heavily guarded city.