Five Tibetan monks are missing after a self-immolation protest.
2012-12-18
Tweet

The five monks from the Bora monastery in Sangchu (in Chinese, Xiahe) county in Gansu’s Kanlho (Gannan) Tibetan Autonomous Prefecture were taken into custody on Dec. 3, a day after their fellow monk Sungdu Kyap set himself on fire in protest against Chinese rule.

Security forces from Amchok and Bora districts entered the monastery and brought the five to the Bora district offices, saying they were being taken away for interrogation, according to the source, a monk named Sonam in southern India with contacts in the area.

Their relatives have not heard anything about their condition since then, said Sonam, who wished only to be identified by his first name.

“At this time, the whereabouts of the Bora monastery monks are unknown and no information whatsoever is available about their true condition,” he told RFA’s Tibetan Service Tuesday.

Sonam said authorities have imposed a strict security clampdown on communications from within Bora town since the self-immolation.

“There’s no denying the fact that there is a crackdown. As for the situation inside Bora, all avenues of information and all communication networks are blocked, and freedom of life and movement are also are all [being] controlled.” 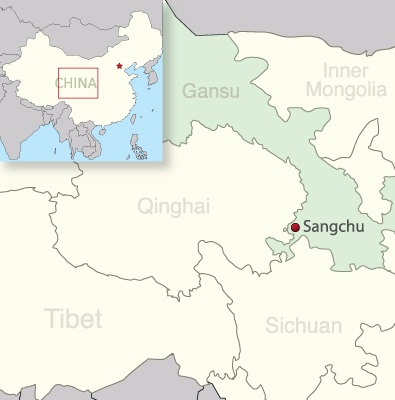 Sungdu Kyap, in his late teens, became the 91st in a wave of Tibetan self-immolators when he set himself ablaze in Bora town on Dec. 2, drawing some 200 police and security forces who doused the flames and took him away.

So far, 95 Tibetans have self-immolated since the burnings began in February 2009, most of them highlighting opposition to Chinese rule and seeking the return of the Dalai Lama, who fled Tibet after a failed national revolt against Chinese occupation in 1959.

Aside from the 95, most of whom died from their burnings, five Tibetans drowned earlier this month after fleeing authorities who had foiled their plot to stage a joint self-immolation protest.

The fiery protests have prompted a strict crackdown by the authorities and calls from Tibetans overseas to end policies they say are pushing Tibetans to desperate measures.

Authorities have responded to the burnings by characterizing them as criminal offenses, punishing and arresting the families and communities of self-immolators, and deploying paramilitary forces and restricting communications and travel in areas where they have occurred.