Nepal’s Maoists have entered the country’s political mainstream, following a war that killed thousands. But is one-party rule still their ultimate goal?
2008-09-23
Tweet 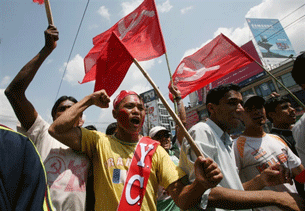 KATHMANDU, Nepal: Maoists demonstrate in support of moves to abolish Nepal's monarchy and establish a republic, 28 May 2008.
AFP

WASHINGTON—Experts are divided on the commitment of Nepal’s Maoists to democracy, following a 10-year civil war and elections in April that gave the party a majority of seats in the country’s legislature.

The Communist Party of Nepal (Maoist) is now the largest party in Nepal’s constituent assembly. And in August, the party’s leader, Prachanda, was named prime minister.

With multi-party elections and the abolition of Nepal’s monarchy this year, Nepal’s Maoists have now achieved their “core demands,” said Urmila Venugopalan, Asia Editor for the Country Risk division of Jane’s Information Group, in London.

“However, at the same time, I think there are genuine concerns that the Maoists have not completely dismantled their parallel power structures at the local and village levels,” she said.

More than 19,000 Maoist fighters have still not been integrated into Nepal’s regular army—a condition of the peace agreement negotiated when the Maoists laid down their arms two years ago, she said.

And many of those weapons are unaccounted for, despite a promise that the guns would be “locked away” under U.N. supervision, Venugopalan said.

What they really wanted is to get rid of the monarchy, and that’s happened."

“I think the impression is that the Maoists still retain a significant cache of weapons.”

Another concern, Venugopalan said, is that the Maoists have not disbanded their youth wing, the Young Communist League (YCL), “which seems to act as a kind of parallel police force.”

“So I think there are credible fears about the intentions of the Maoists. But I think at this stage it’s still a little bit unclear to see where they’re actually going.”

Bob Templer, Asia Program director for the New York-based International Crisis Group, agreed the YCL should be disarmed. “They’ve talked about that, but haven’t done much about it,” Templer said.

Templer said the Maoists’ political leadership may now be trying to avoid direct contact with the group. “But at the same time, they’re not entirely unhappy to have a force that’s capable of intimidating people and doing things like that.”

The Maoists may have abandoned their goal of one-party rule, though, “when they signed the initial agreements with the other parties that led to the peace process,” Templer said, adding that the Maoists recognize they live in a “changed world.”

“What they really wanted is to get rid of the monarchy, and that’s happened,” he said.

“[Prachanda] is playing it very carefully right now,” said Mikel Dunham, a close observer of Nepal’s politics and author of the book Buddha’s Warriors. “The country obviously is in very dire straits, and they need foreign investment.”

“Right now, they’re in a position where they have no choice but to work with the other parties,” Dunham said.

But Dunham said the Maoists are now expanding their power base “on the sly” by quietly placing themselves in unions and private businesses.

“I have a Tibetan friend who owns a carpet factory in Bodhnath, which is on the outskirts of [Nepal’s capital] Kathmandu, and one day he walked into his office and there were three Maoist cadres sitting at this desk, saying that they were going to ‘help him’ with his business.”

“The Maoists’ agenda is and always will be to ultimately take over the country,” Dunham said.

Tibetans demonstrating outside Chinese diplomatic facilities in Nepal have routinely been beaten, detained, and threatened with deportation to India.

"This is the first major crackdown on us by the new Maoist-led Nepalese government," said Tenzin Kunkyab, part of a group of 80 Tibetan protesters detained on Sept. 9. "I think the Nepalese authorities are acting under Chinese pressure."

Told they would be taken to an immigration office, "we refused to move," Tenzin Kunkyab said.

"And police carrying lathis [wooden batons] came in to beat us and force us into police vehicles. Many old ladies were also beaten and injured. Two protesters' hands were badly hurt. When we arrived at the immigration office, they left us in the vehicles for 30 minutes, and later we were moved back to the original detention center."

"They are trying to stop our protests by threatening to deport us, but our protests will continue," he said. "Nepal is [still] a democratic nation."