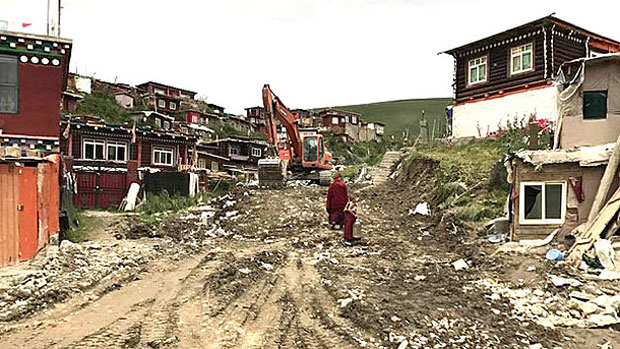 An excavator sits atop a razed residential area of Yachen Gar in an Aug. 11, 2017 photo.
Photo sent by an RFA listener

In a campaign beginning in May, the removals targeted mainly residents who had come from areas outside Sichuan to join the remote and sprawling temple complex, which until recent years had housed an estimated 10,000 monks, nuns, and lay practitioners devoted to scriptural study and meditation.

Speaking to RFA’s Tibetan Service, a Tibetan living in the area said he had visited Yachen Gar on May 11, while the removals were being carried out.

“Since the removals began in May, around 3,500 monks and nuns have been forced to leave,” RFA’s source said, speaking on condition of anonymity. “And around 600 Chinese officials are now permanently stationed at Yachen Gar and maintain a tight watch over the center."

'They closely monitor the monks’ movements and check on all outside visitors,” he said, adding that senior monks and instructors at Yachen Gar are feeling despondent over the removals and are unwilling to talk about them.

Center residents forced to leave had come from as far away as Chamdo and Nagchu prefectures in the Tibet Autonomous Region, with homes in places like Chamdo’s Jomda and Gonjo counties and in the regional capital Lhasa, the source said.

“And apart from a few exceptionally accomplished Buddhist masters like lamas and khenpos [instructors], none of the residents who came from those places now remain in Yachen Gar,” he said.

“Only those monks and nuns who have come from areas of Sichuan are being spared from removal, while monks and nuns coming from Yulshul prefecture in Qinghai are being allowed to remain on condition that authorities in their home areas provide assurance that they will not take part in any political activities,” he said.

To avoid emotional scenes between residents being expelled and their friends who stay behind, no one may accompany those being evicted as they are brought to buses to be taken away, the source said.

“Chinese officials have so far not torn down any of the monks’ and nuns’ dwellings, like they did in Serthar,” the source said, adding that the Yachen Gar residents who had come to the center from other areas had been living in makeshift shelters, “and these have already been cleared away.”

Restrictions on Yachen Gar and the better-known Larung Gar complex in Sichuan’s Serthar county are part of “an unfolding political strategy” aimed at controlling the influence and growth of these important centers for Tibetan Buddhist study and practice, a Tibetan advocacy group said in a March 2017 report.

Speaking in an interview with RFA on Tuesday, Tenzin Dorjee, chair of the bipartisan U.S. Commission on International Religious Freedom, called China’s restrictions on Yachen Gar an “egregious violation of the freedom of religion.”

“This is a case that we will be following closely and will address at all important forums,” Dorjee said.

“Religious freedom in Tibet is going from bad to worse.”