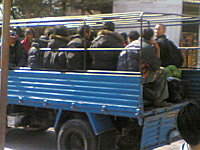 The group of 18 Tibetans was arrested Nov. 28 while crossing into Nepal from inside China, the sources said. They were freed Dec. 8 from Kathmandu Central Jail, where they had been ordered to spend 11 months if the fines had gone unpaid, they said.

All 18 say they plan to go on to India to attend Kalachakra Buddhist teachings and continue their education.

Most of [us] wanted to enroll in monasteries and schools for further education...Some came to attend...teachings given by His Holiness the Dalai Lama.

“When we crossed into Nepal, I thought now we would be safe, without fear of getting arrested by Chinese border forces. We were wrong,” one of the Tibetans, a man named Jimpa, told RFA’s Tibetan service.

“Most of [us] wanted to enroll in monasteries and schools for further education,” he said. “Some came to attend [the] Kalachakra teachings given by His Holiness the Dalai Lama. I came for the teaching and to seek an audience with His Holiness and then take Gelong vows,” or the vows of a fully ordained monk .

Lhundup Dorjee of the non-governmental Tibetan Reception Center for refugees said the group was handed off from police to the Nepal immigration authorities.

Members of this group are aged between 16 and 30, including two women, with three from the Tibetan Autonomous Region and the rest from other Tibetan areas under Chinese control where the Amdo dialect is spoken.

Another four Tibetans, who had traveled separately to India, were released on the same day, Jimpa said. The four had been sentenced to two years’ imprisonment but were also freed after exiled Tibetans paid fines of 18,700 rupees (U.S. $267) each.

All say they plan to return home to the Tibetan areas under Chinese control.

“We went to India for Buddhist pilgrimage. While returning from India we were arrested at a place called Shaperi,” a Tibetan in the group of four said in an interview.

“Once we were taken to a Nepalese police station, they imposed a fine of 18,700 rupees—or we had to face two years in jail. Luckily the Tibetan Reception Center and the Tibetan [exile] government helped with money and we were freed. We are so grateful."

China's People's Liberation Army troops marched into Tibet in 1951. The Dalai Lama has accused Beijing of implementing policies of "cultural genocide" against the region and its Buddhist heritage.

Thousands of Tibetans have risked the illegal border crossing into Nepal and India in search of a better education or the freedom to practice their religion without fear of harassment.

Many end up in Dharamsala, where the Dalai Lama's government-in-exile is based.

In its latest annual report on human rights around the world, the U.S. State Department said the U.N. High Commissioner for Refugees (UNHCR) reported that 2,427 Tibetan new arrivals approached UNHCR in Nepal during 2004.

Of that number, 2,338 were found to be “of concern” and 2,318 were provided with basic assistance, while 89 Tibetans left for India without being registered or processed by UNHCR, it said.

“Many Tibetans, particularly those from rural areas, continued to report difficulties obtaining passports,” the State Department report said. “Police in China have stated that passport regulations permit them to deny passports to those whose travel will ‘harm the national security and national interests.’”