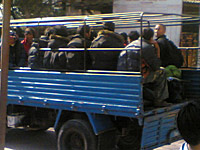 Tibetan prisoners are loaded into a truck in Nepal. Photo: RFA/Loga

KATHMANDU—Police in Nepal are holding 18 Tibetans who crossed the border from China without legal documents in a local jail because they lack the money to pay fines levied for illegal immigration, RFA's Tibetan service has learned.

The group was traveling in a vehicle at the time of their arrest after crossing over to the Bara district of Nepal through the Solokhumbu border region, he said.

Since they did not have money to pay, all 18 Tibetans were imprisoned on the evening of Nov. 28 in Kathmandu's central jail,

"When they were brought to the capital, they were first handed over to police, who in turn handed them over to the Immigration Office."

Detained until they pay the fine

The Tibetans, who are aged between 16 and 30, were found to have no legal documents and fined under Nepalese immigration laws.

"Since they did not have money to pay, all 18 Tibetans were imprisoned on the evening of Nov. 28 in Kathmandu's central jail," Lhundup Dorjee said.

"They will be detained until they pay the fine."

Both the Tibetan Reception Center and the United Nations refugee agency had pressed for their release, to no avail, sources in Kathmandu said.

While UNHCR officials have expressed concern that refugees from Chinese rule in Tibet should be given a fair hearing in accordance with international laws, the agency is unable to pay fines for refugees, sources said.

Two of the group of 18 are women, with three from the Tibetan Autonomous Region and the rest from other Tibetan areas under Chinese control where the Amdo dialect of Tibetan is spoken.

Thousands of Tibetans have risked the illegal border crossing into Nepal and India in search of a better education or the freedom to practice their religion without fear of harassment. Many end up in Dharamsala, where the Dalai Lama's government-in-exile is based.

China's People's Liberation Army troops marched into Tibet in 1951. The Dalai Lama has recently accused Beijing of implementing policies of "cultural genocide" against the region and its Buddhist heritage.