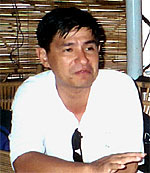 WASHINGTON—More than two dozen Vietnamese police and officials conducted a midnight raid on the Ho Chi Minh City home of a jailed Mennonite Christian pastor, evicting Christian boarders and videotaping as they searched, according to witnesses.

Videotaping as they went, the officials searched the entire house—which also functions as an office for the Mennonite Association in Ho Chi Minh City—and expelled 12 boarders living there, Dung and others said.

Police told the boarders—Bible students and workers—that they couldn’t remain “because the security of the house was unacceptable,” she said.

“I told them I had registered their residency and [they] have appropriate papers, so the ward officials should help them with lodging here,” Dung said. “But they told them this house has a security problem and told them to leave.”

Authorities “told me they had done many reports about the students living here, and they said they would make arrests if I don’t abide by their regulations from now on.”

I don't know what they were looking for… I just want the authorities to leave our family alone.

Dung was also asked to appear at the Ward People Committee office early Tuesday for questioning. “I don't know what [was] in their minds when they brought that crowd to my house, even with video recorder cameras, and searched everywhere, from downstairs to upstairs to the balcony,” Dung said.

“I don't know what they were looking for… I just want the authorities to leave our family alone.”

Another witness, Mennonite pastor Nguyen Cong Chinh, confirmed that the Mennonite Association office and Quang family home at C5H1 Tran Nao, District 2, Ho Chi Minh City, was searched by about 30 security people and police at around midnight on Nov. 16.

Dung’s husband, Nguyen Hong Quang, was sentenced last week to three years in jail for documenting police interference with the building of a chapel.

In the days before his closed-door sentencing in Ho Chi Minh City Municipal Court, local officials and community members went to the house and read aloud a decree ordering an end to religious activities there.

The officials ordered Dung to remove a sign that read “Vietnamese Mennonite Church” and evict the boarders.

Quang was arrested in June on charges related to an incident in March in which he tried to photograph and videotape police as they sought to stop construction of a Mennonite chapel.

Separately, Chinh reported that police in Darlac Province's Krong Pak District summoned another Mennonite pastor, Y Bra, for interrogation from Nov. 10-12 and told him to signed papers renouncing his affiliation with the Mennonite church.

In Chu A village in Gia Lai Province, he said, security personnel have been reinforced and officers are conducting round-the-clock patrols.

They have told villagers that members of any household receiving Chinh would be arrested, along with Chinh, he said.

These incidents are the latest in series of events apparently aimed at intimidating Vietnamese Mennonites, many of whom belong to minority ethnic groups known as Montagnards—who have chafed against their communist rulers in Hanoi for decades.

At Easter this year, thousands of Montagnards protested in the Central Highlands to demand the return of ancestral lands and an end to religious repression.

The U.S.-based Montagnard Foundation claimed 400 Christians were killed in the ensuing crackdown, although Hanoi said only two people died.

The Mennonite Central Committee, the social service arm of the Mennonite Church, was one of very few Western charitable groups permitted to remain in Vietnam after the Communists came to power in 1975.