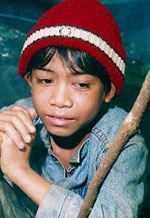 On July 7, correspondents for Radio Free Asia's Khmer service met at least 85 Montagnards — ; all members of Vietnam's mostly Protestant, minority hilltribes — ; hiding in the dense jungles of Cambodia's Rattanakiri Province. The group said they had little food or drinkable water, and suffered from malaria and other medical conditions.

The Cambodian Interior Ministry said there was no evidence to support reports of Montagnards living in the jungle. Cambodian Prime Minister Hun Sen told journalists such reports were spread by "liars." "Who can we help when there is no person?" he asked. "I don't know how and whom to distribute [aid] to since there is no person to give it to."

He agreed, however, to let the United National High Commissioner for Refugees (UNHCR) open offices in northeastern Cambodia, and warned they should not become refugee camps.

"I don't know how and whom to distribute [aid] to since there is no person to give it to."

Many of the Montagnards said they fled Vietnam's Gia Lai Province after tens of thousands of them staged a demonstration in April 2004, demanding religious freedom, independence, and the return of their ancestral lands. Human rights groups say hundreds of Montagnards were injured and at least 10 killed during clashes with Vietnamese police during those protests. Hanoi puts the death toll at two. The Montagnards – often called “America's forgotten allies” because they sided with the United States during the Vietnam War – differ from other Vietnamese in their ethnic background and religious faith.

With the help of UNHCR, scores of Montagnards were flown and bused to Cambodia's capital, Phnom Penh. Cambodian Foreign Minister Hor Namhong meanwhile announced that the UNHCR would be given one month to process the asylum seekers and find a third country to accept them. “If within a month there is no third country to receive them, Cambodia will send them back to Vietnam,” Hor Namhong said.

"If within a month there is no third country to receive them, Cambodia will send them back to Vietnam"

Cambodian officials have accused the UNHCR and others with luring Montagnards into Cambodia and giving them political refugee status. Vietnam has repeatedly said those who cross the border into Cambodia are illegal migrants.

Two journalists — ; RFA reporter Sok Rathavisal and Kevin Doyle of the English-language Cambodian Daily newspaper — and aid worker Pen Bunna were detained as they tried to reach a group of Montagnards along Cambodia's border. They were subsequently released, after signing coerced confessions. Rathavisal said, "We told him the statement was incorrect, but that we would sign just to acknowledge we had read it. We felt we would not be released otherwise."

July 26 Radio Free Asia Slams Cambodian Arrests The Cambodian government arrests two RFA reporters and a human rights worker as they try to reach Montagnard asylum-seekers. RFA President Richard Richter calls on the Cambodian government to release the men immediately and unconditionally and to drop human-trafficking charges against them.