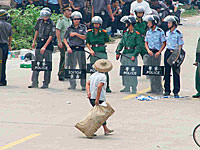 HONG KONG—As rights activists began a signature campaign for villagers near the southern Chinese port city of Shanwei after a violent standoff there, two Guangzhou lawyers who represented farmers in Taishi village have been fired by their respective law firms.

Guo, with lawyer Tang Jingling from a different firm, recently represented residents of Taishi village in their efforts to replace an elected chief amid allegations of corruption surrounding a land deal.

That’s really too complicated. I can’t talk about it...They don’t need a reason to do this sort of thing.

Guo said Tang had received the same notification from his law firm recently. “They didn’t give any reason. This happened at the beginning of November,” she added.

“That’s really too complicated. I can’t talk about it,” Guo said when pressed for the reason for her sacking. “They don’t need a reason to do this sort of thing,” she said.

Shandong-based lawyer Li Jianqiang, who was also on the Taishi residents’ legal team, said the law firms were unlikely to give a reason. “But in fact it’s almost certainly because they were involved in the Taishi village case, and the municipal judicial affairs bureau has intervened to make this happen.”

As in Dongzhou township last week, residents of Taishi village clashed with police when they raided evidence which villagers said supported allegations of corruption against their elected village chief following a major land deal.

I believe in Gao. I think he has good reasons for doing what he’s doing. I have faith in his judgment.

While authorities allowed a re-election to be planned, it never took place. Villagers blamed an intensive campaign of intimidation on the part of local officials for the withdrawal of support for the campaign, which had been strong.

Several lawyers representing the villagers were detained, and Guo Yan reported being beaten at the time.

One of them, Guo Feixiong, was formally arrested, but his case was returned from the local prosecutor’s office in the Panyu district of Guangzhou to the police for more evidence at the end of October.

Guo remains in official custody and has ended the hunger strike that he began on Sept. 13 to protest his detention.

Meanwhile, prominent Beijing human-rights lawyer Gao Zhisheng and his wife Geng He have publicly resigned from the Chinese Communist Party following the closure of their cutting-edge law firm this week.

In a statement announcing his decision, Gao said there was no hope left for the Party, which he described as an organization bereft of morals, compassion or any shred of humanity, which had acted illegally in taking away his law firm’s license.

“I believe in Gao. I think he has good reasons for doing what he’s doing,” Geng told RFA Cantonese service reporter Grace Kei Lai-see. “I have faith in his judgement.”

“Yes, of course there’s danger, but I don’t think he’ll be afraid of that,” she said.

Geng said a deadline given by the Beijing municipal judicial affairs bureau for the couple to hand over all the law firm’s business license and other documents passed Wednesday.

“We didn’t hand them in,” she said. “We have applied for an administrative review and a formal appeal, so we won’t hand them over until those things have been done.”

Gao’s clients at the Shengzhi law firm included residents of Guangdong’s Taishi village, farmers from the southern coastal city of Shanwei and a mining community in the northern province of Shaanxi.

But his work on behalf of followers of the banned Falungong spiritual movement, together with an open letter to China’s leaders condemning the Party’s human rights record are thought to have annoyed the authorities more than anything.

The Taishi standoff, widely seen by Chinese scholars and the legal profession as a test of local governments’ commitment to village democracy and rule of law, began in July after a 100 million yuan (U.S. $12 million) land deal involving more than 2,000 mu (133 hectares) of village land.