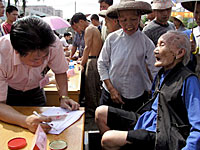 Elderly residents of Taishi at the height of the campaign to recall their elected village chief, September 2005. Photo: AFP

HONG KONG—Villagers in the southern Chinese province of Guangdong have blasted an official version of the Taishi village election dispute surrounding a bid to oust the elected village leader amid corruption allegations.

A local government spokesman from the district of Panyu, which administers Taishi, told a Chinese news Web site earlier this week that the campaign to remove elected village chief Chen Jinsheng was now officially dead.

“After the village election committee announced that recall was no longer in effect, most villagers have accepted the fact calmly because they believed this represents the will of the majority of the villagers,” the spokesman was quoted in the official English-language China Daily newspaper as saying.

“The results of the investigation have come out, the laws are clear, the truth is out, and the basis for the recall no longer exists. Therefore, everyone naturally does not want to get involved in the recall anymore. Production and life in the village have returned to normal,” he said.

But residents of the village told RFA’s Mandarin service that resentment at the government still simmered following strong-arm tactics employed by the authorities.

“It all seems calm and peaceful here on the outside. But many of the villagers are still very angry about the heavy-handed exercise of power and harsh measures employed by the authorities in this matter,” said one villager.

All roads into the village were still being patrolled by gangs of unidentified men who beat up anyone trying to get into the village to report on or advise the campaign. Villagers were also being prevented from leaving, residents said.

Chinese people, from the moment they are born, believe in their hearts that what the Party and national leaders do is right. The problem with political power in the hands of one party is that there is nothing to check it.

Beijing-based activist Zhang Xin described “a multicolored array of uniforms” present at the road turning into the village.

“We don’t want to accept the injustice we see before us. Most of the villagers feel this way. This version of events isn’t true—it’s just what the government is telling outsiders. Taishi villagers aren’t buying it, because we know what’s really going on here. It’s not the truth,” said one man, identified only by his surname, Feng.

Others appeared too nervous to talk about the standoff, which saw dozens of detentions and violent clashes between elderly hunger-strikers and riot police in September.

“It’s not convenient for me to take part in this discussion right now,” one local resident told RFA’s Cantonese service. “Perhaps you should speak to some of the other villagers.”

Beijing-based activist Zhao Xin said one reason behind the apparent victory by local authorities was the near-total media ban on the village.

“No one, not journalists, not lawyers, not civil rights activists, has been able to perform their legal function of witnessing what is going on,” Zhao said.

“So lawyers traveling to Taishi village from Beijing will be stopped and attacked...There is a multicolored array of military uniforms at the entrance to the village. The villagers aren’t allowed to leave, so there’s no freedom or security to speak of there.”

Authorities blamed the dispute on a promise made during village elections by working group leader Liang Shusheng, whom they said promised each villager 10,000 yuan (U.S. $1,238) and a plot of land if they voted for him.

The villagers started the recall campaign against village chief Chen only after they failed to get the land and money they were promised, according to the official government view.

We don’t want to accept the injustice we see before us. Most of the villagers feel this way. This version of events isn’t true—it’s just what the government is telling outsiders. Taishi villagers aren’t buying it, because we know what’s really going on here. It’s not the truth.

Feng told RFA reporter Ding Xiao: “The villagers really wanted Liang Shusheng to win in those elections. Even if he was elected to the small working group, he wouldn’t have been in a position to start dividing up land.”

“So it’s highly unlikely that he would have made such a promise. I think this is just an excuse on the part of the government,” Feng said.

Another resident who declined to be named agreed. “All this talk of people changing their minds about the recall campaign is the result of a door-to-door campaign by government officials to change their minds,” the woman said.

“A meeting was never held about it, taking away the right of the villagers to know what was going on. If there had been a meeting I’m sure at least 60 percent of the people would still have voted to recall Chen,” she added.

“If your aim is to respond to the mood of the people, then it doesn’t matter who started it. Right now they are blocking off all the roads into the village to keep out media. So just ask yourself why they might be doing that.”

Major state-run media run reported only limited and official sanctioned versions of events in Taishi, although news and debate have flowed far more freely for those in China with access to the Internet.

“Chinese people, from the moment they are born, believe in their hearts that what the Party and national leaders do is right,” a listener surnamed Zhou from the southern city of Foshan told the program.

“The problem with political power in the hands of one party is that there is nothing to check it. If you are a republic, then your country should reflect the values of commonality and equity inherent in the word 'republic'...What does this mean? This means firstly that the highest power should be with the public, with the people. And secondly that the ruling party must accept limits to its power and accept supervision, and the independence of the ruling institutions,” Zhou said.

According to an incomplete chronology compiled by online pro-democracy activists, Chinese villagers launched 53 recall campaigns between March 1999 and December 2003, resulting in the removal of elected chiefs in 30 cases, a success rate of 60 percent.