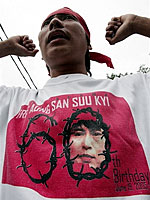 He was released Dec. 14, 2005. In the following interview with RFA's Burmese service, he called for democracy and reconciliation in his homeland, also known as Myanmar:

Ko Myat San: It was some time after midnight that the prison authorities came and told me that I have to go down to Rangoon. "You are fortunate," they said, and they expressed the wish that things would work out for me...They said they had learnt that everything would be OK for me, as far as my living arrangements were concerned....I was handed over to a security detail, and a prison officer was assigned to accompany me.

'Bent at the waist'

I hope that we will all try our best in every possible way to walk the path of national reconciliation so that democracy shall come about,

RFA: How is your health?

Ko Myat San: I have a bulbous growth on my waist bone. And because of that, it’s not in the right position. Here I’m sitting and talking to you, but when I stand up after about an hour, it goes out of position. I’m bent at the waist. I straighten up only after I make myself walk for a while.

RFA: If you were to be asked about your most memorable experience, about what struck you most, what would you say?

Ko Myat San: About four, five, six months ago, in a magazine we were allowed to read, I read a short article, called "A lost day," and what I felt then is still in my heart.

In this article, a woman wrote about what she felt when she saw, on the news on TV, Israeli authorities releasing Palestinian prisoners after the Gaza peninsula affair. When she saw the scene on TV, she wrote that she felt something rise up from her subconscious and she thought, "Here, too...," but she didn’t finish her thought as tears fell from her eyes. That was memorable for me because it coincided with what I felt.

'We shall give our best'

RFA: When we hear about people who have been imprisoned for many years, we wonder about how they passed their years in solitude. With what mental qualities did they pass long years in prison? Is there anything you would like to say about this, Ko Myat San?

Ko Myat San: We have tried so hard, putting in our utmost effort to achieve what is right and appropriate. But we have cultivated in ourselves the thought that when it is our time to give, we shall give the best of ourselves.

I would like to encourage everyone to use peaceful means and to work to bring about democracy in Burma,

RFA: Ko Myat San, you are one of the leaders of the student movement, and you have paid dearly with many years of your life because of politics. Therefore, regarding the future of Burma, what kind of hopes and desires do you have?

Hundreds of students still in jail

Ko Myat San: I hope that we will all try our best in every possible way to walk the path of national reconciliation so that democracy shall come about.

RFA: You have friends, those who love you, your colleagues, here inside the country and abroad. Now that you are free, if there is a word of greeting you want to say to them?

Ko Myat San: I would like to encourage everyone to use peaceful means and to work to bring about democracy in Burma. As a friend of mine said, a country’s state and progress rests on its entire people. That’s all I want to say.

Burmese students have traditionally played a large part in the country's pro-democracy movement, and were imprisoned in large numbers following waves of demonstrations in 1988, 1991, and 1996.

Amnesty International estimates that more than 260 students remain behind bars from these movements, although the true number of detentions still isn't known.

Original reporting in Burmese by Win Naing Oo. Produced for the Web in English by Luisetta Mudie. Edited by Sarah Jackson-Han.